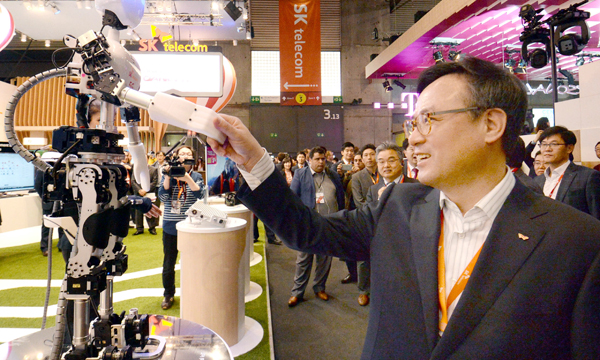 SK Telecom CEO Jang Dong-hyun vowed on Monday to pinpoint a new driver for growth for the mobile carrier in an environment that it has slowly been building, particularly for fledgling start-ups in Korea.

His pledge differed from those of the country’s other two mobile service operators - KT and LG U+ - at the Mobile World Congress, now under way in Barcelona. Both boasted of their technological prowess.

“A single company engaging itself in every different service is impossible,” Jang told reporters. “SK Telecom will create an ecosystem for start-ups to do better, and grow together with them.”

The SKT CEO’s interest in the latest technologies and budding enterprises is underscored by the fact that he paid his first visits to global start-ups owning technologies related to the Internet of Things (IoT), a hot-button trend in the IT community.

The company has been increasingly experimenting with IoT, aiming to take the lead in the next-generation platform, which will enable multiple objects or devices to transfer or exchange data over a network without human-to-human or human-to-computer interaction.

In a related move, the CEO came up with a plan to commercially debut Mobius, an open-source IoT platform, in May.

SK Telecom has been developing the platform since late 2011 as a national project, together with the Korea Electronics Technology Institute and Ntels. Should the platform be made available, any start-up devoted to developing IoT devices or apps may more easily develop their products.

Tech bellwether Samsung Electronics earlier displayed keen interest in IoT. Yoon Boo-keun, the CEO of Samsung Electronics’ consumer electronics unit, said during the Consumer Electronics Show in Las Vegas last month that in five years, all Samsung’s products will be IoT capable, meaning they can all be connected.

SK Telecom also unveiled at the event a variety of smart devices that it has dubbed Lifeware, ranging from a smart watch to a Bluetooth earset, a projector, a portable Wi-Fi speaker and a solar-powered smartphone charging case.