There was a reason why Shin was little concerned. Earlier this season, right attacker Park Chul-woo, also Shin’s son-in-law, was forced to leave the team for military duty.

That means the Bluefangs will go directly to the championship series, becoming only team to be in every final since the league started in 2005.

In the best-of-five championship series, which will begin March 28, the Bluefangs will aim for their ninth overall championship trophy. The team has won seven straight.

“I’m happy, but at the same time, I’m also concerned about the championship series,” Shin said Wednesday. “If you don’t win the championship, you lose half the happiness.”

As a coach who hasn’t missed taking home a championship trophy for eight years, Shin knows a few things about preparation. 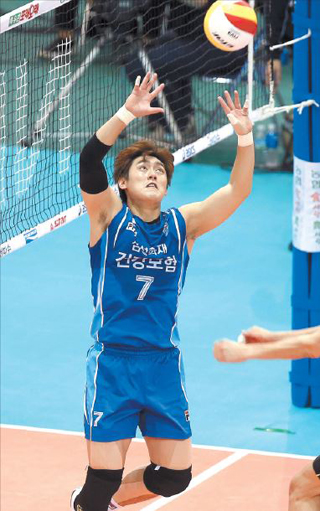 Yu Kwang-woo of the Daejeon Samsung Fire & Marine Insurance Bluefangs sets the ball during a V-League match against the Suwon Kepco Vixtorm. [NEWSIS]

“For the match against the Jumbos, I told players to finish the game as soon as possible so we can prepare,” he said. “There is a problem if you win the regular season title early.”

The 59-year-old already notified players that training will be intense. The Bluefangs are No.1 in the league for fewest errors with only 4.95 per game.

Already, Shin has selected a target for this intense training: Leonardo Leyva Martinez. The Cuban left attacker is the V-League’s top scorer with 1,259 points in 33 matches.

“Leo doesn’t like running, but this is a must in training,” Shin said. “I don’t think running only enhances endurance. It also is good for balance and thinking.”

While Shin guides the team from the sidelines, setter Yu Kwang-woo is the leader on the court.

“The relationship between the setter, coach and foreign player is very important,” said Shin.

Yu was acclaimed as a prodigy before joining the club. In his senior year at Inchang High School, the 29-year-old won all the national competitions he competed in, while during his senior year at Inha University, he partnered with Kim Yo-han, who now plays for the LIG Insurance Greaters, to win four trophies.

However, in the 2007 Universiad, he hurt his ankle and since then has suffered pain. After going through two surgeries and rehabilitation, Yu returned to the court in 2009. However, the setter still says it is challenging to do jump tosses, and he takes painkillers several times a week.

Yu, who became a Bluefang regular in 2010 after veteran Choi Tae-woong left for the Cheonan Hyundai Capital Skywalkers, has been selected as the league’s best setter for three consecutive seasons.

There has been some criticism of Yu for constantly setting the ball for foreign players. This season, Leo was responsible for nearly 60 percent of team’s attack.

“When I first heard that criticism, I didn’t feel good, but these days I just laugh it off,” Yu said. “To win, you have to make a choice that has a good percentage of success.”

Just like Shin, Yu also wants more despite all the trophies he collected with the team.

Since Yu joined the club in 2007, the Bluefangs never failed to win the championship.

“I want to continue to win the trophy until I end my career,” he said.