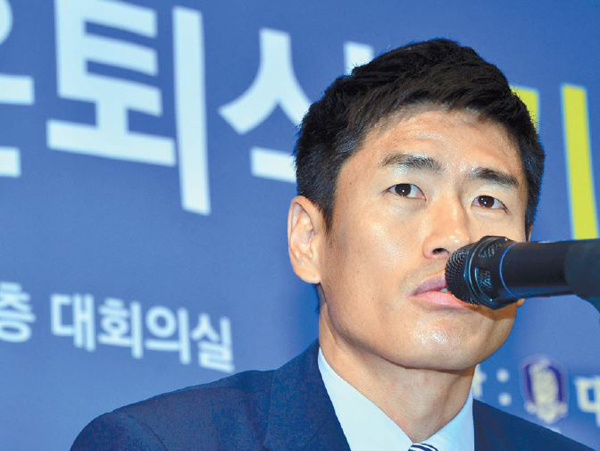 As he prepares to begin a new chapter in his football career, Korean star Seol Ki-hyeon says he eventually wants to be a coach at an overseas club.

Through his agency, GSEN, Seol surprised football fans by announcing Tuesday that he will hang up his spikes after 15 years as a player to become interim head coach at Sungkyunkwan University in Seoul. The member of 2002 Korean national team that reached the semifinals of the World Cup held a press conference on Wednesday to explain his decision.

Seol, who appeared in black suit at Korea Football Association (KFA) headquarters in Seoul, was steady and calm as he read a statement.

“I always thought I should retire when I lost my passion for football,” said Seol, who turned professional in 2000 after graduating from Kwangwoon University. “During preseason training, I thought it was about time, as my physical condition is not what it was in the old days. While having this thought there was the coaching offer, and that’s why I decided to retire.”

Seol said he has received an appointment letter from the president of Sungkyunkwan University as football team coach. Since he doesn’t have a class-1 coaching license, the former player for the Pohang Steelers and Ulsan Hyundai will serve as interim coach until he receives his license.

Addressing concerns he might not be ready to take control of a team, Seol said he has prepared for long time.

“In my 15 years as a player, I met lot of coaches and experienced various things that made me pursue a coaching career of my own,” he said. “If I started as an assistant coach, I would not get to show my own style, so I decided to start as a head coach.”

For Incheon United supporters, Seol’s decision was especially shocking as the K-League Classic season will start this weekend. The Gangwon-born forward played with Incheon United FC since 2012, scoring 11 goals in 83 matches.

“I want to say I’m sorry to Incheon fans who are disappointed with my abrupt retirement decision,” he said.

Seol, who started playing football at the age of 10, began his professional career overseas after being selected for the KFA’s first football prospect fostering program in 2000.

After debuting with Royal Antwerp in Belgium, Seol transferred to Anderlecht and won the Belgium Jupiler League title, in the process becoming the first Korean to play in the UEFA Champions League group stage. He then moved to England to play for the Wolverhampton Wanderers, Reading and Fulham before ending his European journey in 2010.

“At first, I didn’t even know exactly where Belgium was located, but I was happy going there because I knew I would be playing football in Europe,” he recalled.

For Seol and fans, the highlight of his career was the 2002 Korea Japan World Cup. In the Round of 16 against powerhouse Italy, Seol netted the equalizer in the 87th minute to force the match into the overtime, which Korea won on a golden goal from Ahn Jung-hwan.

“The fact that I was a member of the 2002 World Cup team that will be forever remembered in Korean football history will always remind me that I was such a blessed person,” said Seol, who scored 19 goals in 82 matches for Korea. “The goal against Italy was the most valuable goal that I ever scored, and with this goal and the World Cup experience, I was able to become a better player.”

Seol, who also played in the 2006 World Cup, hopes for similar success in his coaching career.

“I have the same feeling I had when I started my football career in Europe,” he said. “If I start from here and get recognized, I might get a chance in the K-League. I also have a dream to go overseas and coach good clubs and perhaps national teams there.”