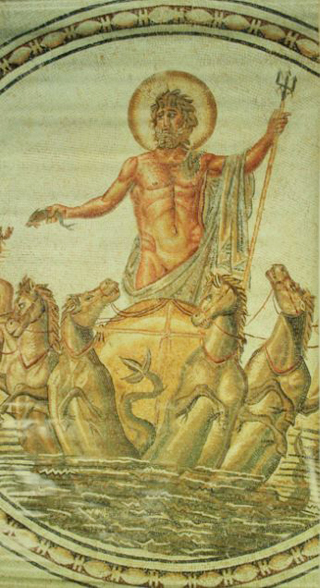 The “Exhibition of Tunisian Mosaics and Handicrafts Masterpieces” will feature artwork from the northern African country, including “Triumph of Neptune,” above. Provided by the Korea Foundation

The Korea Foundation is presenting a rare opportunity to see the “true beauty of African handicrafts,” with a focus on items from Tunisia, the northernmost country on the continent.

The “Exhibition of Tunisian Mosaics and Handicrafts Masterpieces” is a weeklong show that started from Wednesday at the KF Gallery in central Seoul.

Mosaics have been a popular art form for thousands of years in Tunisia.

“The exhibition will provide visitors with a unique opportunity to view the motifs and traditional handicrafts that have been derived from influences of the ancient Roman Empire in the region of North Africa,” said an official from the Korea Foundation.

Some of the exhibits include remnants of ancient Rome, whose history is still prevalent after its rule of Tunisia, according to the foundation, including the “intricate patterns of mosaic craftwork that reveal the customs, love stories, emotions, commerce, sports, academics, history and mythology of the long ago Tunisian people,” the organizer said.

The exhibition will also feature “artfully rendered” posters that portray the ordinary life of Tunisian people from the past as well as mosaic relics uncovered from various archaeological sites around Tunisia.

An exhibit of photographs showing handicrafts created by contemporary artists from Tunisia and around the world are on display, too.