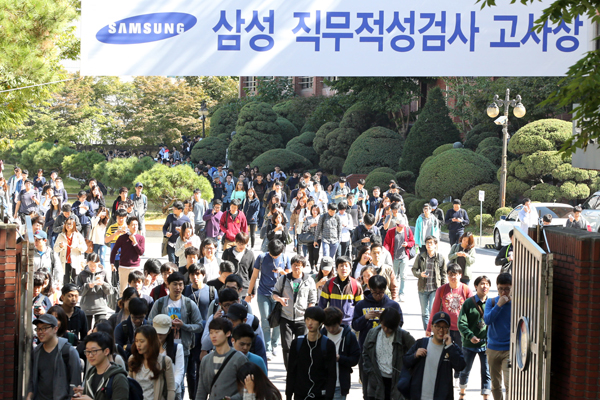 College graduates leave after taking a written test for Samsung Group last October at a high school in Seoul. More than 100,000 of them applied for the test at 79 locations across the country. [JoongAng Ilbo]

Until I completed graduate school, being a journalist was never a part of my life plan. I gave up on my old dreams of being a dancer or a writer and living as a struggling artist because I knew I lacked the genius. As a realistic alternative, I finished the graduate program. Then I saw a recruitment notice for newspaper reporters, and I applied without knowing anything about journalism. It turned out to be my calling.

If I were to find a job today, I wouldn’t even dare to apply to a newspaper. Back then, applicants were tested on what we’d learned in school, like writing an essay. Today, tests are more specific and applicants are far more qualified. I’d learned about different types of news articles, such as box, straight and sketch, but today, applicants already know what they are and can write samples. They study what they can learn on the job in a month. If I were to take today’s test, I wouldn’t know where to begin.

As the recruiting season began, major corporations announced their hiring standards and screening processes. Companies are not hiring as many this year, and the ideal candidate for each company is different. One values talent in liberal arts over other qualifications, while another focuses on on-the-job skills.

Some prefer candidates with specific talents rather than universal appeal. Since companies want different qualifications and offer different tests, so there is no one way for the applicants to prepare for all of it.

Applicants put their hearts and souls into writing their personal statements, as if they were born to work for the company. It is often derided as a “personal novel.” When young people acquire college credit, engage in community service, gain various licenses and social experience, how is it possible to follow a life scenario to work for a certain company? Having lived lives full of variables that deviate from our original plans, the older generation knows that it is simply impossible. Then why do we demand young people present a plan?

Frankly, it’s an excuse and a tactic by the older generation to push young Koreans to become more qualified. In order to make young people useful contributors to the community, society needs to give them a chance and invest in them. Without giving them opportunities to work and grow and expand investment, the established generation demands unrealistic standards to blame the failures of the youth on young people.

Meanwhile, businesses prepare for the employment boom. While demanding excessive qualifications, the established generation makes money by selling licenses. And young people spend time and money to get those licenses and certificates and are exploited to prove their passion by working with minimal pay. They learn to deceive others by writing “personal novels” and realize that TOEIC is not a test of English proficiency but of test-taking skills. They believe the myth that skills come before substance.

Can a society that wastes the passion and labor of young people really grow? Are the employees hired through such a complicated verification process superior to the older generation? To me, new hires are equally inexperienced and green, and they grow to become good reporters in due time. Corporate human resources managers have more complaints. Theysay young people are slow to adapt, lack passion and patience, and quit easily. The young generation is suffering from unemployment, and companies are struggling because young employees are quitting their jobs.

But if you put the shoe on the other foot, it is all very understandable. Compared to the time, money and effort used to fill in one’s resume, the work of an entry-level employee is rather boring and plain. My generation must have been nervous to learn new things and stayed with companies longer. Those who are already qualified can easily become disappointed by the reality and leave.

When I was younger, I didn’t even have enough time to lounge around and be lost in my thoughts. In retrospect, that down time made me who I am today. What young people really need is time to really think about themselves.

Young people today hardly have such time. Before making them compete against one another, society needs to think about what healthy youths should look like.