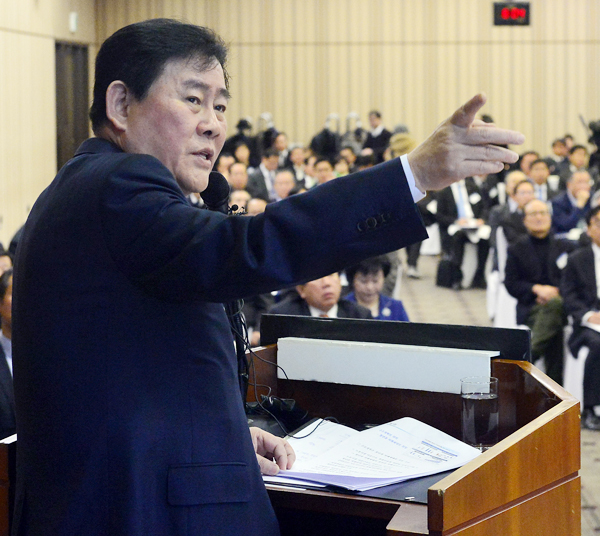 With data showing that Korea may be slipping toward deflation, Finance Minister Choi Kyung-hwan has called for higher wages to boost the depressed economy.

His comments came in the wake of disappointing economic data, including low inflation and worsening exports, that has raised fears of deflation.

Despite a trade surplus in February, imports fell 19.6 percent and exports 3.4 percent. Industrial output slid 1.7 percent and consumption dropped 3.1 percent. February’s inflation rate of 0.52 percent was the lowest in 16 years.

Still, Choi said he didn’t agree with the view that Korea is already experiencing deflation, but admitted he was worried.

“Although it is true that inflation is currently at a very low level, the core price index [excluding items subject to temporary volatility, such as oil and agricultural products] still remains at the 2 percent level,” he said. “It is hard to say we are in deflation.”

The increase in housing loans attributed to Choi’s ambitious deregulation of the real estate market will not be a serious problem, he said. “It is normal that low interest rates lead to an increase in household and corporate loans,” he said.

Household debt has been increasing rapidly since the Bank of Korea lowered the benchmark interest rate twice in the second half of 2014.

The high youth unemployment rate should be resolved through labor reforms, he said.

“When I look at the reality of a decreasing number of jobs for youth, I wonder if there is no tomorrow for the Republic of Korea,” he said. “The dual labor market and impractical education system have led to the high unemployment rate for the young generation.”