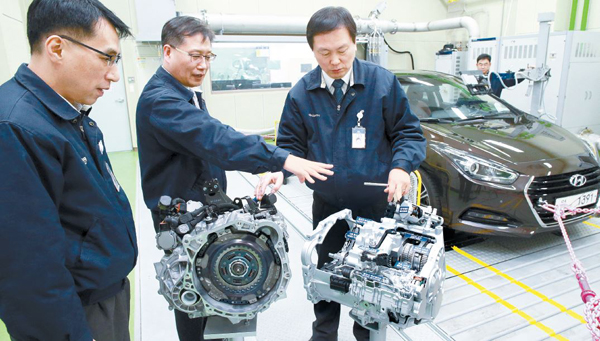 Researchers at Hyundai Motor Group inspect a seven-gear dual-clutch transmission installed on the latest i40. The i40, which has a 1.7 VGT engine, has a fuel efficiency of 16.7 kilometers per liter (39.3 miles per gallon). Provided by the company

In a laboratory at the Namyang Research Institute, the main R&D center of Hyundai Motor Group in Hwaseong, southern Gyeonggi, a car engine sat with dozens of cables and hose pipes sticking out of it on Tuesday.

After unplugging all the tubes, researchers of the nation’s two auto giants, Hyundai Motor and Kia Motors, started testing the engine and carefully monitored how it operated. The engine wasn’t installed in a car, but it sounded as if it were.

“We can test it in accordance with 15 different driving conditions, though we don’t install it in an actual vehicle,” said Joo Sung-baek, the director of diesel engine development. “We’re checking the amount of air injected to the engine and running several other tests to check its performance. All the data created in the tests will automatically store to computers in real time.”

There are about 200 labs that conduct such tests every day at Namyang, Joo said, and about 1 billion won ($909,220) worth of high-end test equipment is provided in each lab. Researchers at Namyang also test engines developed by rival automakers.

“We test about 20,000 car parts and how it can operate together in order to improve fuel efficiency, no matter it is only about 0.1 percent,” Joo added. “It’s an uphill battle.”

Improving fuel efficiency has been an important task for global automakers as it provides a better driving economy and performance. Governments worldwide continue to provide more regulations related to fuel efficiency and unstable international oil prices. It’s been no exception for Hyundai Motor Group.

When the JoongAng Ilbo visited the Namyang institute, researchers were conducting a transmission performance test. What the researchers were trying to do was save power delivered from an engine when the gear is shifted. In order to test transmission completely, it takes 45 days, Hyundai Motor said. 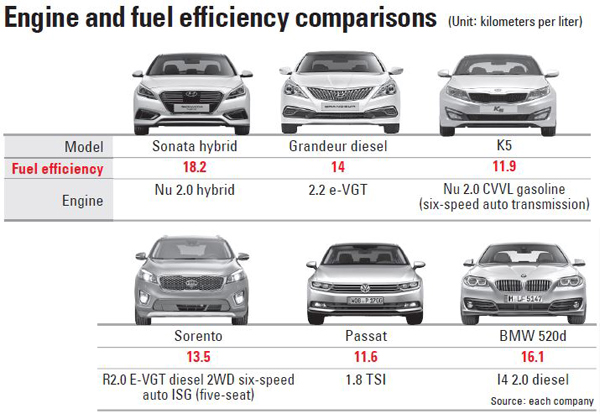 “We conduct a 300,000-kilometer simulated test drive for 45 days to check a transmission’s performance and durability,” said Lim Ki-bin, a spokesman for the transmission development division.

The fuel cost necessary for one transmission test is about 20 million won. Hyundai Motor Group invests about 100 billion won for such tests annually.

When a series of tests are done with engines and transmissions, researchers make about 300 pilot engines, which is worth about 50 million won each, meaning that it costs about 15 billion won in the early stages of engine development. When the final piece of the pilot engine is developed, the next step is to test it under different driving conditions.

Additionally, Hyundai Motor Group said it will develop a front-wheel, eight-speed automatic transmission by the end of next year. A higher-speed transmission provides better fuel efficiency since less power is lost when acceleration occurs. It also provides better driving balance, according to the company.

“We are currently focusing on finishing developing a front-wheel, eight-speed transmission,” said a researcher at Namyang. “Once it’s completed, we will apply the transmission to premium sedan segments.”

“In order to improve fuel efficiency, those newly developed engines and transmissions need to operate in balance with dozens of other parts installed in the car,” said Jeon Je-rok, a researcher at Namyang. “It’s very tough work that researchers like us like to call ‘God’s territory.’?”