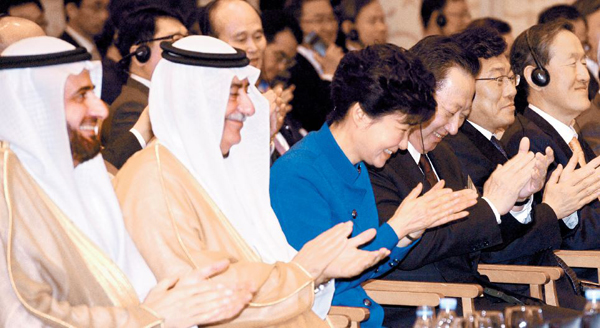 The so-called Miracle on the Han River from the 1960s through 1980s that helped Korea out of poverty in the post-war era to become one of Asia’s leading economies was largely the result of civil engineering and construction business in the Middle East.

More than four decades after the first Korean construction crew set foot in Saudi Arabia in 1973, Korea is reaching out to the Middle East with new business opportunities that are much more than simple bricks and steel.

The country is hoping to revive its past glory equipped with its newest artillery: medical services, energy and many of the information and telecommunication technologies (ICT) that have become a commanding presence in the global market today.

Such ambition was evident during a forum Wednesday hosted by the Korea Chamber of Commerce and Industry at the Four Seasons Hotel in the Saudi capital of Riyadh.

“The sweat that Korean workers spilled on construction projects in Saudi Arabia was the driving force behind the Miracle on the Han River,” said Park Yong-maan, chairman of the Korea Chamber of Commerce and Industry, during a speech at the business forum. “Korea is Saudi Arabia’s best economic partner.”

Park, who lived in Saudi Arabia for a year in 1982 while working on several construction projects, including the cargo terminal of Riyadh King Khalid International Airport, stressed the benefits both countries could enjoy from strengthening their business cooperation.

Abdulrahman Bin Abdullah Al-Zamil, president of the Council of Saudi Chambers, said in the opening speech he hopes that economic cooperation will expand from traditional areas of energy, construction and plants to new fields such as ICT and medical services.

Tawfiq bin Fawzan Al Rabiah, Saudi minister of commerce and industry, noted that the Saudi government has recently been diversifying its economy by creating manufacturing clusters for automobiles, steel and electronic goods, while stepping up investment in ICT and medical industries as well as several engineering fields. It is part of the Saudi government’s agenda aimed at lowering its dependence on oil while enhancing knowledge-based businesses.

Mohammed bin Ahmed Garwan, an atomic energy team leader at the King Abdullah City for Atomic and Renewable Energy, told forum participants the Kingdom relies on thermal plants for power generation, but plans to concentrate its investments on nuclear and renewable energy by 2032 to secure a steady power supply.

“Each Middle Eastern country is trying to diversify its economy in preparation of the post-oil era,” said Lee Dong-geun, vice chairman of the Korean Chamber. “We expect huge opportunities for Korean businesses.”