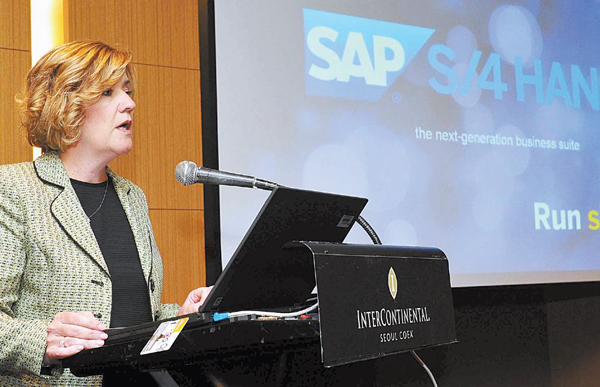 Europe’s largest software maker, SAP, demonstrated its latest business software in Korea, which has drawn both acclaim and skepticisms since its launch last month.

It was the biggest product launch since the German company introduced predecessor R/3 23 years ago.

The reception of S/4HANA will be a key indicator of whether SAP has adapted to the new digital and data-sourcing environment amid competition with rivals Oracle and IBM.

Fox-Martin emphasized the simplicity and speed of the suite’s data processing.

“It [S/4HANA] basically cuts the time it takes to compile business accounts and forecasts to minutes, not hours and days, by analyzing vast amounts of data in local memory,” she said.

The new software’s data footprint is 10 times smaller on disk compared to comparable products from other companies with far quicker data processing.

But the software also has a controversial point: S/4HANA only runs on the company’s database platform, which is called HANA.

Critics said that could limit customer’s choices, though the company said customers who choose databases from other companies will be supported through 2025.

SAP also said that S/4 HANA had an enhanced end-user interface called SAP Fiori. Some users have criticized the user interface of SAP’s software for not being simple and intuitive.

The latest software can run in the cloud or on company premises. Different versions of S4/HANA will be launched over the next several years.