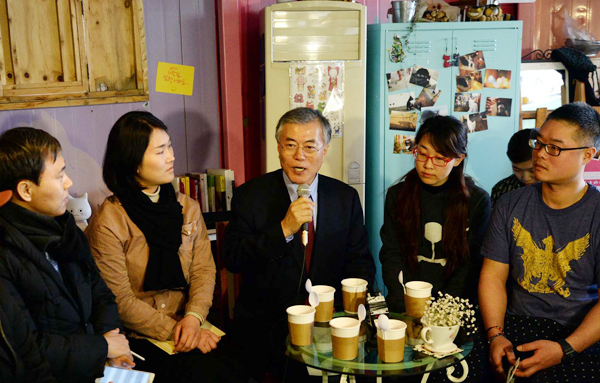 More than three weeks have passed since the main opposition party gave Moon Jae-in, its formerly defeated presidential candidate, a second chance by electing him as party chairman; and since then a significant change has been observed in the politician, who promised that the New Politics Alliance for Democracy (NPAD) would be victorious in the next election.

According to his aides, immediately following his victory in the party’s race for chairman on Feb. 8, Moon made a special request.

“You can arrange all my schedules, but the first public activity must be something related to the elderly,” he was quoted as saying.

His first public appearance as the new NPAD chairman came the next day, when he visited the graves of former Presidents Syngman Rhee and Park Chung Hee, the father of incumbent President Park Geun-hye, to whom he lost the 2012 presidential race.

His visit bears significance in that it was the first time an opposition leader paid respects to the two former statesmen, whom the country’s liberals have labeled dictators.

The move was interpreted as his effort to bridge deeply rooted ideological divisions between liberals and conservatives to achieve national unity - both late leaders were heavily supported by the country’s elderly population.

One week later, Moon took another important step. On Feb. 16, as the National Assembly prepared to vote on whether to confirm President Park’s prime ministerial nominee, he visited the Korea Senior Citizens Association.

And while some NPAD officials complained that the new chairman was treating the legislature lightly, Moon didn’t seem to mind.

Moon made a subsequent visit on Wednesday during a trip to North Jeolla, where he stopped by the provincial chapter of the Korea Senior Citizens Association to further engage the elderly, who are primarily conservatives.

Han Sang-jin, a professor emeritus at Seoul National University whose work has analyzed the Democratic Party - the predecessor to the NPAD, which Moon represented in the 2012 race - advised liberals in his recent book to pay their respects at Park Chung Hee’s burial site and engage elderly voters.

“In an aging society, giving up on the votes of the elderly leads directly to defeat,” he wrote.

But while Moon did not acknowledge publicly that he had accepted Han’s advice, he did recommend the professor’s book.

During the 2012 presidential election, the NPAD chairman suffered a narrow defeat to Park Geun-hye, the ruling Saenuri Party candidate. With 51.6 percent of the votes, she was victorious over Moon’s 48 percent.

During the poll, the country had 40.46 million eligible voters. Of them, 21.8 percent were in their 40s, with the next largest demographic being those older than 60, accounting for 20.8 percent.

In fact, his last three weeks appear to have shown the transformation of a politician who was often considered “gentle.” From the start, it was clear that he was attempting to reach out to moderate-conservatives, while highlighting liberals’ traditional weaknesses.

He has also become more assertive toward President Park, while his activities have so far focused largely on the economy.

“When Korea is split between the liberals and the conservatives, there is no way for the liberals to win,” Moon was quoted as saying in a recent meeting with his aides. “Winning the next general election and the presidential election is not about the left or the right, it is a matter of livelihood.”

Moon’s determination to expand the NPAD’s ground with moderate-conservatives was also seen in his shunning of the leftist minority Progressive Party. Since his election, Moon has not met with the leaders of the country’s third-largest party - a rare move, as forming an alliance among liberal political parties is common practice.

“There can be no opposition alliance without a clear justification,” Moon declared.

According to a key official in the Progressive Party, this marked the first time the new chairman of the main opposition party had not paid a courtesy visit.

Under Moon’s leadership, the NPAD is also expected to go after issues often considered conservative territory.

“Conservatives have been proven to be incompetent when it comes to issues concerning North Korea and security, as well as economic growth and national unity,” a key Moon aide said. “Moon wants to win on these issues. The party can lean further right or further left, especially when the issue is about the people’s livelihoods.”

Moon has also made it clear that President Park is his primary opponent.

In his interview with the media on Feb. 26, Moon proposed personally sitting down with Park to have a discussion on the economy. While the meeting has yet to take place, his determination to overtake conservatives on economic issues is decidedly absolute.

During his first three weeks as NPAD chairman, Moon made 40 public appearances. Of them, 40 percent were related to the economy, including a meeting with office workers and a town hall meeting focused on housing issues.

On the wall of its conference room, the NPAD also took down ideological slogans and hung a new motto: “A political party for the economy with the public’s livelihood as top priority.”

And during a town hall meeting on Monday to discuss skyrocketing housing rental prices, Moon did not hesitate to attack President Park.

“The working-class is suffering from housing prices because Park did not follow through with any of her presidential pledges,” he said. “Our party will directly listen to the voices of the people and reflect those opinions into our policies to be an effective party.”

Additionally, he criticized Park for “having deceived and betrayed” the public by promising to expand welfare programs without a tax increase.

Yet, for now, Moon’s biggest obstacle appears to be winning full control over his party. Throughout the past three weeks, he has held five late-night closed-door meetings with party leaders to discuss sensitive issues, including the vote on Park’s prime ministerial nominee, Lee Wan-koo, and the appointment of NPAD officials.

“He is trying to avoid repeating the situation in the past, where an agenda was presented to NPAD lawmakers and then the hardliners took control over it,” one of Moon’s aides said.

Still, despite Moon’s efforts, internal rifts within the NPAD have shown no imminent signs of mending. After Moon appointed his confidant, Kim Gyeong-hyeop, as the senior deputy secretary-general, Joo Seung-yong, a member of the supreme council, refused to work on party affairs.

Meanwhile, a recent poll showed that Moon remained the frontrunner over eight consecutive weeks as the strongest presidential contender.

A Real Meter poll released Monday that surveyed 2,500 adults nationwide from Feb. 23 to 27 showed that Moon recorded 27 percent, down 0.5 percentage points from the previous week.

It was the first time he ranked third since his mayoral reelection in June.