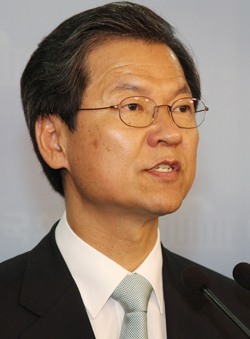 Chun Jung-bae, a political veteran in the main opposition party, declared Wednesday that he will leave the New Politics Alliance for Democracy (NPAD) to run independently in the upcoming legislative by-election.

A former justice minister and four-time lawmaker who once served as the liberal opposition party’s floor leader, Chun said he will run in the April 29 by-election to represent Gwangju Seo-B District. He will run without any party affiliation.

“If it remains unchanged, the NPAD will never be able to win the next presidential election,” Chun told the JoongAng Ilbo. “I decided to transform the party through the power of the Gwangju people.”

Gwangju and North and South Jeolla are opposition strongholds. The NPAD will conduct an internal primary to nominate its candidate for the by-elections, where three lawmakers will be elected in Seoul, Gwangju and Seongnam in Gyeonggi.

“I wanted to give up the premium that comes with the NPAD,” Chun said. “I wanted to ask the people if they trust my political view and vision.”

Chun said he will hold a press conference in Gwangju on Monday to formalize his bid. Chun is the second political heavyweight to leave the main opposition party in recent weeks.

Former lawmaker Chung Dong-young, who represented the opposition in the 2007 presidential election and was defeated by Lee Myung-bak, left the NPAD in January to create a more progressive party ahead of the by-elections.

Chun, 60, previously served as the justice minister under the Roh Moo-hyun administration and floor leader of the Uri Party, one of the predecessors to the NPAD. He requested that the NPAD nominate him in last year’s by-election in Gwangju, but failed to win the candidacy.

NPAD Chairman Moon Jae-in expressed disappointment at Chun’s decision to leave the party. “He was a key founding member of the Uri Party who even served as its floor leader,” Moon said Wednesday. “I have asked him to join the internal primary, but it is regretful that he has chosen a different path.”

Moon’s failure to persuade Chun to stay with the NPAD is expected to create a challenge for the main opposition’s leader, who was elected as the party chairman just last month.

Moon worked closely with Chun and Chung, both ministers during the Roh administration, while the NPAD chairman served as the presidential chief of staff at the time.

Despite Chun’s departure, Moon said the NPAD’s leadership will no longer make a strategic nomination, calling it a practice from the past.

“Not just Chun, but anyone who wants to run should join the primary and compete,” he said.

So far, three NPAD politicians have expressed their intention to run in the primary, and one of them is set to face Chun in the by-election.

The April by-election, which will be Moon’s first test, won’t be an easy fight because more candidates will join the race from the Progressive Party and Chung’s new party, splitting the liberal votes.