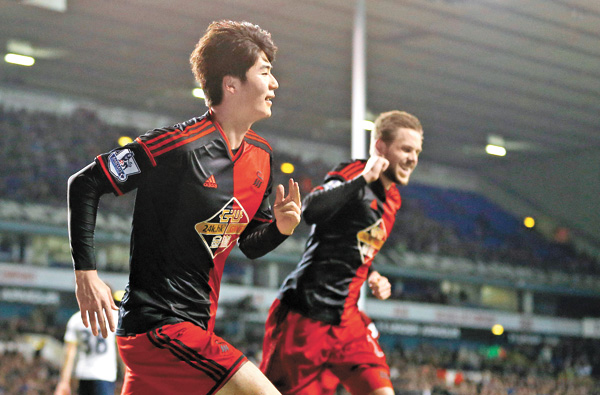 In the 28th game of the season on Wednesday against Tottenham Hotspur at White Hart Lane stadium in London, Ki netted the equalizer in the 19th minute for his sixth goal.

Swansea was trailing 1-0 at the time after allowing a goal to Nacer Chadli in the seventh minute.

The match was delayed when Swansea’s French striker, Bafetimbi Gomis, collapsed on the pitch after Chadli’s goal. Gomis regained consciousness and was reported in stable condition after medical treatment.

Soon after teammate Gylfi Sigurdsson sent a free kick off the post, the 26-year-old Korean received a pass from left back Neil Taylor on the left side of Tottenham’s penalty box and sent the ball through the legs of Tottenham goalkeeper Hugo Lloris.

Park set the record for scoring by a Korean with five goals for Manchester United in both the 2006-7 and 2010-1 seasons. The former PSV Eindhoven and Queens Park Rangers player retired last year.

“I am proud to be a Korean who can score in the English Premier League,” Ki told Ilgan Sports, an affiliate of Korea JoongAng Daily. “I want to score more goals.”

Ki, who knelt and prayed after the record-breaking score, also tied his career-high for goals in a season set in 30 matches when he was playing for Celtic FC in the Scottish Premier League.

Sigurdsson scored to cut the deficit for the Welsh club in the 88th minute.

In the previous five matches in which Ki scored, Swansea had four wins and a draw.

“I’m sad that our team lost,” said Ki, who played for Sunderland AFC last season on loan. “My big goal is to help my team finish the season with a good record, and that is ahead of my personal goals.”

Since leading Korea to the final of Asian Cup in Australia in January, Ki has bagged three goals in five games. The Korean national team captain also is Swansea’s leading EPL goal scorer.

Ki, who joined the Swans in the summer of 2012 for 7 million euros ($7.7 million), recently has played more aggressively. The former FC Seoul player’s usual position is defensive midfielder, but these days he is often seen playing sides and going forward to the box.

“There has been a slight change of role,” he said. “I now have a good sense of getting goals and as I try to go forward, good scoring opportunities are often created.”

Meanwhile, fellow Korean Kim Bo-kyung, who plays for Wigan Athletic in the second division English League Championship, scored his team’s only goal in a 1-0 victory over Norwich City. The former Cardiff City player notched his second goal of the season with his left foot in the eighth minute. He collected his debut goal against Blackpool on Saturday.