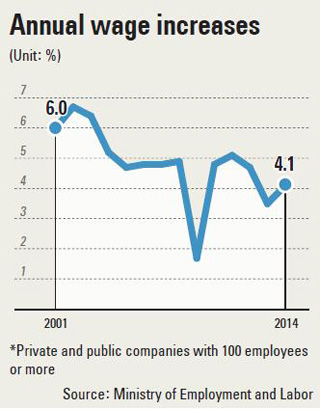 Some companies whose salaries are set to automatically rise more than 1.6 percent under a newly revised base salary system, which folds some bonuses and other regular payments into the base salary, were asked to freeze monthly wages, the federation said.

Citing external factors such as a rocky international economy as well as shrinking consumption and surging household debt in Korea, the body told its members in a statement that excessive pay raises would have a detrimental impact on Korean industry.

“Labor circles are demanding high pay raises, considering the public sector’s increase of 3.8 percent and rising consumer prices,” the statement read. “But excessive pay raises that don’t consider companies’ payment capabilities would trigger various side effects, such as falling competiveness in exports, shrinking investment, and an inability to create jobs.

“For sustainable growth and stable employment, we are desperately in need of stabilized wage increases,” it said.

The federation also asked employers to narrow the gap in salaries between workers at conglomerates and small- or medium-sized companies. It said conglomerates paying high salaries or enterprises recording high profits were encouraged to use their profits to create more jobs rather than for pay increases.

Although a federation official told the Korea JoongAng Daily that the recommendation was released annually and unrelated to Finance Minister Choi’s comments, it was interpreted as a defying of the minister’s demand for pay raises a day earlier.

On Wednesday, Choi urged business leaders to raise salaries to boost the economy, saying, “Without pay raises at a reasonable level, the home market can’t rebound.”

The Federation of Korean Trade Unions (FKTU), the nation’s largest labor body, has demanded a 7.8 percent increase in salaries this year for regular workers and 17.1 percent for temporary workers. The left-wing Korean Confederation of Trade Unions (KCTU) called for a fixed monthly increase of 230,000 won ($209).

Statistically, the average wage raise in Korea was estimated to be 2.4 percent in 2014 at companies with more than four employees.

“The federation’s advice for a 1.6 percent raise is very disappointing to us,” Kim Ji-hyeon, an FKTU official said.