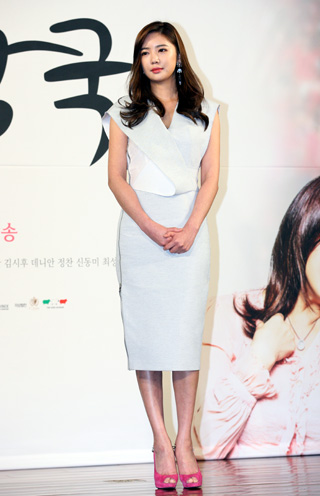 The management agency of actress Lee Tae-im, who reportedly cursed and yelled at singer Yewon while she was shooting a reality TV show, released a statement Wednesday apologizing for her behavior.

“Lee is reflecting on what she’d done and is having a hard time because of that,” said Onion Management Group in the press release.

According to sources close to the show, the 29-year-old actress and Yewon were shooting for the reality TV show “Tutoring Across Generations” on Jeju Island.

Young and old celebrities pair up and learn from each other in the reality show, whether it is how to navigate the Internet or how to speak English.

On the day of the shoot, singer Lee Jae-hoon taught Lee and Yewon how to dive.

But the show’s production team has decided to drop Lee from the show because of the scandal.

It was also rumored that the actress would quit the drama series “My Sparkling Heart,” but she will resume acting in a few days.

“We’re sorry for the production team of ‘Tutoring across Generations’ and the drama team of “My Sparkling Heart,’” the agency said.

“Lee has been having a hard time because her certain body parts have become spotlighted through the media [whenever she appears on TV shows] and she also feels hurt knowing that her drama series would soon end because of poor viewership.”

Lee debuted in 2008 but has been put into the spotlight more because of her voluptuous body rather than her acting.

Yewon, who will soon join the reality TV show “We Got Married,” canceled an event in which she was supposed to attend with other celebrities Thursday night.

“She canceled it because she had another event scheduled,” Yewon’s agency said.

Lee told an online news agency a few days ago that Yewon did not use honorific language during the shooting of “Tutoring across Generations,” but Yewon denied Lee’s claims.

In Korea honorific language is expected to be used by younger people when they are addressing their elders.