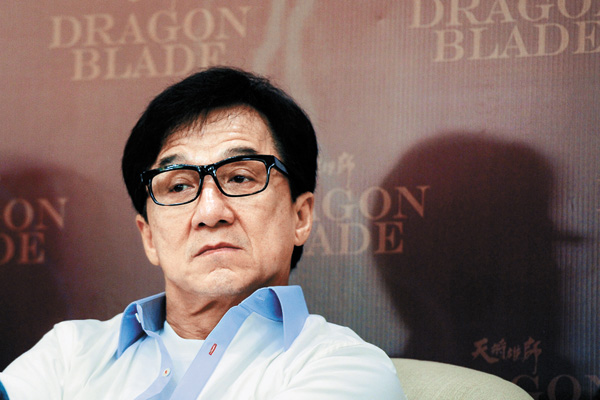 Hong Kong actor Jackie Chan looks on during a press conference to promote his new movie “Dragon Blade” in a hotel in Kuala Lumpur, Malaysia, on Feb. 11. Nowadays the pro-Beijing actor is well-known as fodder for jokes. [AP/NEWSIS]

BEIJING - Jackie Chan might still be popular in China, but nowadays the pro-Beijing actor is as well-known as fodder for jokes as he is for his gritty martial arts and slapstick humor on screen.

His latest contribution to the country’s mass culture and entertainment: “duang.’’

It’s not a word, but a sound he made in an old TV commercial, meaning something like “ta-da!’’ A new mash-up video of the old ad has made “duang’’ a trending topic on China’s social media.

The sound began circulating days before the rubber-stamp legislature was called into session this week, and some observers see it as a way for the public to question the credibility of delegates and express dissatisfaction with the political system.

Chan, now a quasi-politician appointed to a legislative advisory panel, has been singled out not only because of his celebrity status but for his reputation among many Chinese as someone who has been mercenary in aligning himself politically with China’s Communist Party to tap the mainland’s movie market.

Though the tone of the phrase is more derisive than fun, Chan has been a good sport.

“It’s quite funny,’’ he told reporters on the steps of Beijing’s Great Hall of the People this week.

Chan used the sound in a 2004 infomercial to sell shampoo. In the ad, he maintains there was no “duang’’ - or special effects - to make his hair look blacker, shinier and softer, but that the shampoo itself was responsible.

Authorities later ruled that the commercial made false claims, and Chan’s reputation suffered.

The word “duang’’ - in its Romanized form - has become one of the hottest expressions in Chinese cyberspace, and parodies of Chan’s shampoo endorsement are spreading online. Someone has even proposed a Chinese character for the sound by overlaying the two characters of Jackie Chan’s name, though modern Chinese does not officially incorporate new characters.

Chan is one of just a few well-known faces connected to the legislature, a body the public has little influence over.

“When the legitimacy of these delegates gets questioned, celebrities such as Jackie Chan are the first to be targeted, because the public does not know other delegates,’’ said Beijing-based independent commentator Shi Shusi. “Those jokes relay a sense of anxiety.’’

Chan has been a polarizing figure on his own as well.

In 2009, he spoke against freedoms in Hong Kong and Taiwan, saying, “The Chinese need to be supervised, or they will do whatever they please.’’

In 2013, Beijing appointed Chan to the Chinese People’s Political Consultative Conference, or CPPCC, the highest advisory body to the national legislature.

“What Jackie Chan has said shows he does not have the sense of right or wrong, but the sense of interest,’’ said Beijing economics professor Hu Xingdou, who called for a boycott of Chan in 2009.

Jokes suggesting slyness and snobbery on Chan’s part have surfaced one after another in China’s cyberspace over the past several years. When his son, Jaycee Chan, was arrested on drug charges last year, the public gloated, pointing out the irony that the father has served as China’s anti-drug ambassador. AP