Woori Bank shares to be split up

Woori Bank shares to be split up 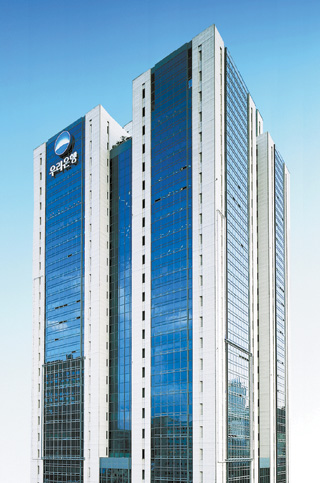 The government has finally given up the idea of selling its majority stake in Woori Bank to a single buyer and split the shares. The shareholders will share management rights, including the naming of the outside directors.

According to sources in the financial industry, the Financial Services Commission, which is overseeing the sale of the shares, has agreed to a draft proposal by three scholars, including Korea University business managment Professor Park Kyung-suh, to sell the 51 percent stake owned by the Korea Deposit Insurance Corp. to multiple buyers.

This will be the fifth attempt by the government to privatize the banking group since 2010. In an attempt last year, the government tried to sell 30 percent of the controlling 57 percent stake it held at the time, but failed as no buyer showed interest.

It became evident that the banking group, which once competed for the top position in the industry, has lost appeal and investors doubt that it’s worth an estimated 3 trillion won ($2.7 billion) to buy all the shares to secure management rights. 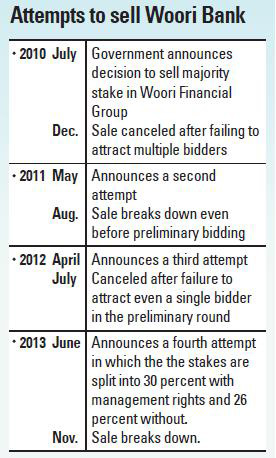 Last year, Woori Bank sold off some key affiliates, including its brokerage unit, and ended its holding company structure. As a result, the nation’s first financial holding company, Woori Financial Group, which started in 2001, was merged into the bank.

Several financial institutions showed interest in buying the bank, but tough requirements set by the FSC and a high price contributed to the failure.

When the government announced its privatization plan under the Lee Myung-bak administration, there was a lot of hype about major banking groups, including KB Financial Group, taking an interest in the acquisition.

In 2010, Woori was competing with KB Financial Group for the title of No. 1 lender in the country by asset size.

Even worse, Woori last year reported poor earnings, which caused a ripple effect in the market. Analysts were concerned that the potential insolvency of the bank would repel investors.

The privatization of the bank has become a major project for Woori.

Even Lee Kwang-goo, who became CEO of the bank at the end of the year, vowed to succeed in selling the government-owned stake.

“My foremost mission is to find an owner for the bank in a way that the government has judged the best [for the financial company] and the most appropriate,” Lee said at a press conference in December.

By splitting the stakes, the government is confident it will attract more investors.

But there are concerns that selling stakes to different stakeholders will undermine the management of the bank as there will be no single body making decisions.

The report by the scholars proposed overhauling the corporate governance structure of the bank.

If Woori Bank shares were sold to five to 10 buyers, the proposed structure would be a cooperative governing body made up of the larger shareholders. To participate in decision making, the stakeholder would have to own a minimum of 0.5 percent of the shares in the bank for more than six months.

The government was able to sell a 5.94 percent of a 26.97 percent stake that has no management rights last year. At the time, bidders were eligible to purchase between 0.5 percent and 10 percent of the shares.

If the first tender fails to attract investors, the government would push a bloc trade: selling a given stake at a set price under terms privately negotiated between the buyer and the seller.

Basically, that means Woori would have to find its own buyers, which the government says could be more efficient than trying to sell the shares in an open competitive environment.

The government plans to announce details of the sales in June.