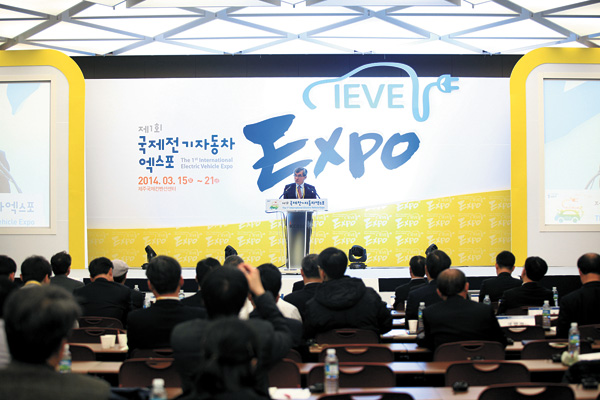 So far, even if one buys an electric vehicle (EV), the owner has to charge the car at home. The new charging stations will be open 24 hours a day and located on highways and in commercial areas.

Jeju was chosen as a test site for a business model that eventually could be applied nationwide because nearly one in three EVs in Korea is on the island, which is a small area accessible on a single charge.

According to the Energy Ministry on Wednesday, about 3,000 EVs are driven by Koreans nationwide and about 1,000 units are registered in Jeju.

The team will establish a special-purpose corporation in May to jointly invest a total of 32.2 billion won ($29.2 million) by 2017. The joint fund will pay for 5,580 EV chargers nationwide, of which 3,750 units will be installed on Jeju and 1,830 on highways and commercial and residential areas in major cities.

By end of this year, 100 high-speed EV chargers will be available at highway rest areas nationwide. High-speed chargers can provide a full charge in just 20 minutes, whereas regular chargers take several hours.

Prices at the new charging stations have not yet been determined, said the government, but there will be a dual pricing structure that offers a slightly cheaper membership rate.

Usually, charging an EV is only about 30 percent of the cost of a liter of gasoline. And the government has provided subsidies in cash of as much as 15 million won and an EV charger to promote the use of renewable energy.

However, electric vehicles are rarely seen on streets because they are expensive to buy. The cars typically cost 35 million won to 50 million won. Their wide acceptance also has been hampered by the range available on a single charge and the absence of charging stations. An EV can travel as far as 100 kilometers (62 miles) on a full charge.

To address such problems, the government intends to establish a favorable private business environment for vehicles powered by clean energy, which has been mostly publicly funded.

“So far, the Ministry of Environment gave out a free EV charger when people purchase an EV, along with some subsidies,” said Na Seung-shik, head of the renewable energy division at the Energy Ministry. “But such support is a sunset policy, scheduled to end in 2020. We thought there should be enough charging stations so that anyone could access them.”