Sick of the selfie stick? Meet its humbler replacement

Sick of the selfie stick? Meet its humbler replacement 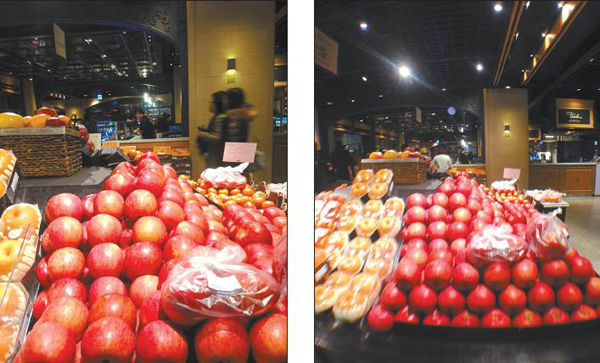 A photo taken by the ordinary iPhone camera and one taken with a wide-angle “selfie lens.” By Seo ji-eun

If you were considering jumping on the selfie stick bandwagon, it might be too late.

The selfie stick, better known in Korea as the neologism “selcabong,” combining the words self, camera and bong (pod), has already passed saturation point after its sweeping popularity last year. The baton is being quickly relayed to the portable and handy “selfie lens,” described as a detachable lens for a mobile phone.

When the selfie lens, which is basically a type of wide-angle 35 millimeter lens that comes with a built-in clip, is attached to the smartphone camera - either on the front or the rear - the viewing angle expands to between 130 and 140 degrees, making it possible for the user to shoot more objects within the same screen.

Two types of wide-angle lenses are usually available - the 0.4x and the 0.67x. The former offers a wider angle, frequently dubbed a super-wide angle. It comes in a single package or as a bundle with two other types of lenses - the fish-eye and the macro. Prices vary between 5,000 won ($4.5) and 40,000 won, according to the quality of the items and the country of origin.

How the selfie lens looks when attached to the iPhone camera. By Seo ji-eun

Using online stores, including deal-of-the-day apps such as Coupang, is the easiest way to purchase the products. Just enter “selca lens” in Korean on Naver, the nation’s top portal site, and hundreds of vendors pop up instantly. Street salesmen in bustling shopping districts full of trendy people in their 20s and even Namdaemun traditional market in central Seoul sell the fashionable smartphone photography aid.

The made-in-China wide-angle lens with “selfie cam lens” written on the package and no brand name retails for 10,000 won from an accessory store in Gangnam subway station’s underground market. The same product costs as much as 13,000 won at some online shops. Conveniently, it comes with a lens cap and a smallish velvet pouch for protection, while the rim for the lens comes in four different colors - black, silver, pink and blue.

The seller said he is seeing a rising demand for selfie lenses nowadays and can “definitely feel that the days of selfie sticks are gone.” Online marketplace Gmarket says selfie lens sales jumped 135 percent between Jan. 9 and Feb. 10 compared to a month earlier.

When the quality of the photographs taken with a wide-angle lens is compared with those shot using a selfie stick, the latter is the winner because the former results in an inevitable distortion near the frame.

But this may be a small sacrifice to make if you think about being able to avoid the hassle of carrying a pole half the size of your arm and becoming the embarrassing center of attention whenever you take a selfie.

Some unfortunate people have also complained that the selfie stick, one of the 25 best inventions of 2014 according to Time, cost them more than 10 times the price they paid for it after tragically dropping their expensive Galaxy or Apple smartphones to the ground and seeing the screen shatter into pieces.

At the higher end of the market, there is a wide-angle 0.65X lens from Korean producer Surpass-i that costs 39,920 won. It’s not affordable for everyone, but many serious users dub it the best selfie lens ever.

Even though the selfie stick has belatedly invaded U.S. shores recently - visitors were overwhelmed by the new gadget during the annual Consumer Electronics Show in Las Vegas in January - the fever is likely to wane sooner than later.

Museums and galleries in the United States are increasingly banning the trendy tourist item to protect objects and visitors. The Smithsonian, the largest research and museum group in the world, prohibited the photography aid as of March 3, “for the safety of our visitors and collections.” The museum was following in the footsteps of New York’s Metropolitan Museum of Art and Modern Museum of Art, the Getty Center in Los Angeles and the Cleveland Museum of Art.