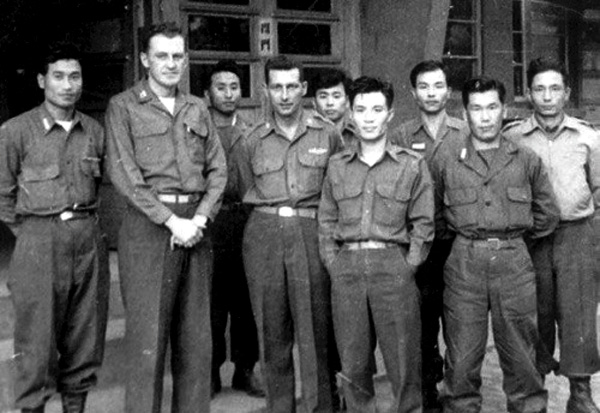 A 34-year-old Park Chung Hee, far right, a colonel serving as head of the Army intelligence school, poses for a photo with other officials at the military intelligence bureau in Daegu in late 1951. Park was reinstated in the Army in 1950. [JoongAng Photo]

Looking back, there was nothing special in my first meeting with Park Chung Hee. But on the cusp of turning 90, when I recall my first encounter with him, it comes back to me vividly.

We did as told, reporting for duty to a man dressed in a black suit. The man had a small figure and looked tanned. He smiled shyly as he said in a humble manner, “Hello. I am Park Chung Hee. You don’t need to report for your duties. I am not that important here. Please take a seat.”

I shook hands and sat down. He told me he was stripped of his uniform because he got in trouble, without divulging any details. “I heard you guys graduated at the top of the class from the military academy. Welcome to the unit,” Park said.

Park was working as a civilian officer after his dismissal earlier that year. I had heard his name when I was in the military academy. He was a company commander overseeing military academy cadets. I had also heard that sometime in 1948 he was taken somewhere.

It was only later that I found out that he almost landed on death row for being a member of the outlawed communist Workers Party of South Korea tasked with recruiting party members. A military court spared his life in February 1949 by giving him a suspended jail term. Shortly after his release, he had no choice but to leave the Army.

During Japan’s colonial rule of the Korean Peninsula, Park graduated from a teaching college in Daegu. But he had a strong longing for the outside world.

He changed from teaching to a military career by enrolling in the Manchukuo Imperial Army (the armed forces of the Japanese puppet state of Manchukuo, or Manchuria). He graduated at the top of his class and won special admission into the Imperial Japanese Army Academy for his academic performance. In short, he had landed on an elite course.

After returning to Korea following the liberation from Japan, he was commissioned as second lieutenant by the constabulary run by the U.S.-run military government, which was a precursor of today’s South Korean military. The Korean Army lacked manpower and it recruited men who had been enlisted in the Japanese imperial army.

The nascent military lacked discipline and Park lamented the low sense of duty among his fellow servicemen. A sense of confusion consumed the country just freed from colonial rule.

Capt. Kang Chang-sun was a member of the underground Workers Party and got along with Park as a fellow soldier. He was tasked with recruiting cadets into the communist party and Park was one of his targets.

Kang arranged dinners with Park many times. At the dinners, Park did not shy away from venting his displeasure and anger at national affairs in general. Park’s disappointment in the country and military leadership grew deeper and deeper and he admitted it while drinking with Park.

It did not take long for his hot-blooded complaints to boomerang on him. Park was arrested on charges of following communist ideas and plotting a rebellion against the state as a member of the outlawed communist party in November 1948, and so was Kang.

Some said Park may have been influenced by his older brother Sang-hee, whom many suspected to have been a Communist. But those rumors had no credibility. Park Sang-hee, who was my father-in-law, was a nationalist and had nothing to do with Communism. And their relationship was not that intimate.

It was Colonel Paik who worked so hard to get Park’s life sentence commuted to a suspended prison term. He circulated a petition for Park’s release and, following his release, he made sure that he could land a job as a civilian officer in the Army’s intelligence unit.

To Park, 1948 and 1949 were challenging times in which he was forced to lose his military career. Though he still could make ends meet by working as a civilian officer at the intelligence unit, his duties were supervised by one of his former military academy students named Yoo Yang-su, which must have added to a sense of humiliation for Park.

But not once did Park complain or display any sign of disgruntlement over his situation. I could not have grasped the feelings he must have felt when he told me and my fellow graduates, “You don’t need to report for your duties. I am not that important here.”

In the tumult of post-war Korea, one man was always there
http://koreajoongangdaily.joins.com/news/article/article.aspx?aid=3001427

On the eve of a coup that would transform Korea
http://koreajoongangdaily.joins.com/news/article/article.aspx?aid=3001456