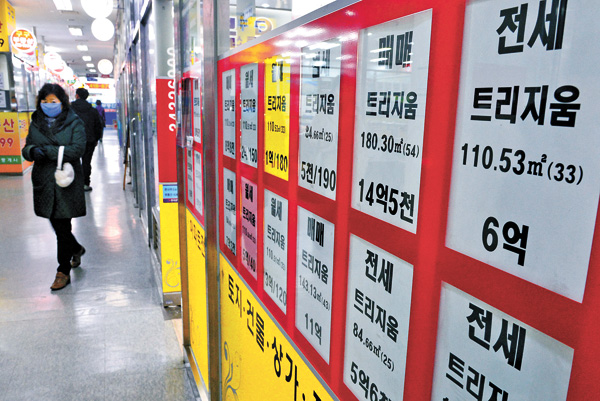 Jeonse advertisements cover the window of a real estate agency in Jamsil, southeastern Seoul, on Thursday. High jeonse prices are contributing to a resurgence of the housing market. [NEWSIS]

Sale prices are 87.8 percent of assessed value and have been above 85 percent since August.

Hopes that the worst might finally be over in the real estate market have grown since Finance Minister Choi Kyung-hwan eased the loan-to-value and debt-to-income ratios for mortgages in July and the central bank cut the benchmark interest rate twice in the second half of the year.

Even less expensive housing such as duplexes and low-story apartments are attracting bidders.

Competition on the auction block is clearly heating up. Nationwide in January, there were 7.5 bidders on average for each available unit. That’s the strongest competition the market has seen in the month of January since 2000. In February in Seoul, there were 9.5 bidders for each apartment, compared to a ratio of 7.9:1 last year.

One of the main reasons behind the competition in the auction market is that with apartment prices going up, fewer units are being put up for auction.

There were 2,132 housing units up for auction in September, but in January there were just 1,629.

“For owners, it has become more profitable to sell the apartments than to sell them at auction,” says Lee Chang-dong, a senior researcher at Ggi Auction. “As a result, the number of housing units placed on auction has been sharply reduced and competition has heated up.”

As the housing market gains momentum, apartments of 85 square meters (915 square feet) or larger are generating more interest from investors. While the market was in a downturn, many investors opted for smaller apartments.

The auction price ratio for apartments of 120 square meters or larger also has been rising, from 78.9 percent in December to 83.3 percent in January. Last month, it was 83.2 percent.

Market analysts, however, warn that when bidding for an apartment that is up for auction, people need to be careful as they could end up buying at a much higher price than they would have just six months ago.

Additionally, things could become more complicated when a large loan or jeonse is involved.

Some buyers could end up losing their investment on auctioned apartments whose loans or jeonse deposits exceed the value of the house.

In other cases, buyers might be responsible for maintenance and refurbishment.

Therefore, one should be careful when considering auction apartments as investments.

“Some buyers are surprised at the cost of management and maintenance,” says Kim Jae-il CEO of Story Auction.