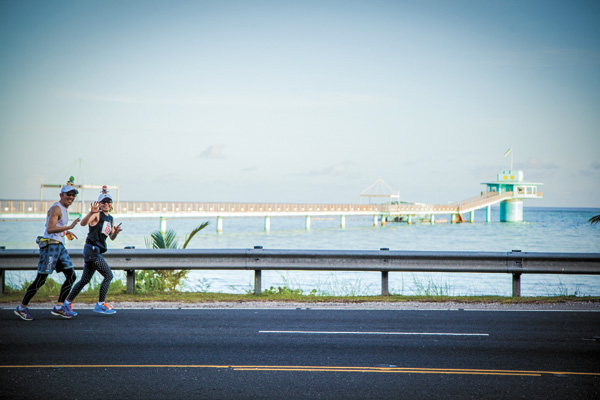 Marathoners wave as they run the Guam International Marathon. Provided by the organizer

While most wait for the warmer spring weather to return before indulging in their favorite outdoor activities, others choose to persevere.

Marathoners are part of the latter, and yearn to feel the crisp wind on their faces as they step across the starting line, usually with thousands of others.

But with many sports brands having introduced relatively shorter races in Korea over the past few years, the country has seen a boost in the number of youngsters enjoying running as a festive activity rather than a sport.

Inspired by the trend, a few international marathons are set to recruit these leisure runners for their events prior to the popular marathon season, which falls in the spring and fall.

Thanks to Nike, which launched its 10K race in Seoul in 2008, many beginning and intermediate runners have surpassed their psychological resistance toward running long distances. 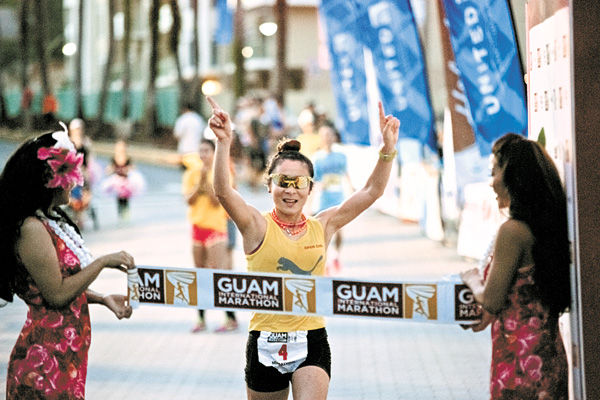 Korean national Yun Eun-hee was the first one to cross the finish line at the Guam International Marathon last year.

The race has also recruited new runners through social media networks, many of them young people looking for something new to do with their friends. Other sports brands, such as New Balance, have also joined the trend to attract more athletes in their 20s and 30s.

To keep marathon novices entertained during those runs, organizers often set up side shows around the course or have popular celebrities join in the race. Even at the finish line, runners are congratulates with live entertainment.

But with word spreading so quickly across social media, it’s often difficult to register in time.

Since spots fill up so quickly, some serious runners, especially those who train beforehand, actively sign up for more events.

Seoul International Marathon, one of the largest and oldest races in Korea, has offered a shorter 10K race since last year to cater to demand. The March 15 event, whose registration period has already closed, is open to those of all abilities. Organizers also arranged a performance by popular idol star EXID, among others.

“Unlike before, we set up some of these events to satisfy young runners at the finish line,” an official with the Seoul International Marathon acknowledged.

“We even made the official T-shirt for the 10K more colorful, in black and orange, while we offer a simpler blue shirt to the ones running the full race.” 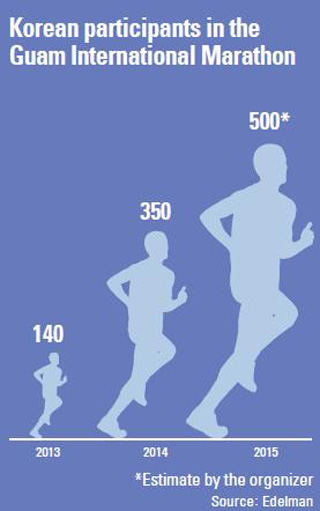 Although there are no official statistics recording the number of marathon runners in Korea, the number has steadily been decreasing, said Lim Wang-kuk, the president of the National Marathon Association’s office in Seoul.

“There are many different groups of people who run full or shorter 5K races, so it’s hard to keep data on how many marathoners are out there,” Lim said.

“The majority who run the full marathon are in their 40s and 50s, and there hasn’t been much of an influx to join the existing runners. So we hope that these running events can be the stepping stone for youngsters so they can see how much fun they can have through running.”

Because marathon training requires body strength and regular workouts, a few of the Army bases in Korea, including the ones in Yangju, Gyeonggi, invite marathon runners to motivate newly enlisted soldiers become healthier and stronger.

The soldiers who perform well in local races also have the opportunity to win extra vacation days. And industry experts hope that such training can also be used to recruit future applicants for full-length marathons in the future.

In Korea, there are about 450 marathons. Most are put on in the spring and fall when the weather isn’t too cumbersome on runners. As many as 15 races take place on the same weekend in April, May and June; and then again in September, October and November. Popular races, including the Seoul International Marathon, recruit around 20,000 runners, while smaller ones in each region cater to a couple thousand.


Moving out of Korea

As more people feel less intimidated by running long distances, they have begun to turn their eyes to overseas races, an attractive option for those also looking to travel and spend some time at the beach.

Guam in recent years has risen as one of the most popular destinations for marathoners who want a little bit of a workout and a little bit of relaxation time with the family.

The Guam International Marathon, which was established in 2013, has aggressively promoted its race - set for April 12 this year - after Koreans were the first to finish in its last two races.

Koreans have increasingly shown more interest in shorter races less than a full marathon. Industry experts hope that enthusiasm eventually turns them on to the possibility of running a full race, which is about 42 kilometers (26.2 miles). Last year’s full-length JoongAng Seoul International Marathon, shown on the far left, is one of the largest and most popular events in Korea. Sports brand New Balance, second from left; cosmetic company Amore Pacific, third from left; and Nike offer runners the opportunity to participate in shorter races. [JoongAng Ilbo]

“It felt so exciting to run in such an exotic environment,” said Yun Eun-hee, last year’s winner. “I was amazed that I could empathize with the foreign city I was running in.”

The Guam International Marathon’s organizers rewarded the winner of a local Korean marathon in January with a round-trip plane ticket to Guam and a hotel voucher on the island, encouraging them to participate in this year’s event.

The marathon, registered on the International Association of Athletics Federations for tracking the official record, is becoming more popular, with its scenic courses along the beaches, different from any other races that run across the major metropolitan area.

It also offers four options: full and half marathons, along with a 10-kilometer and 5-kilometer routes for runners of all levels. Due to its tropical weather, the race begins early at 3 a.m. so that participants can get to the finish line before it gets too hot. The shorter races start later.

Getting to watch the sunrise while running is also a perk.

The organizer even opened a website in Korean due to rising interest in the South. 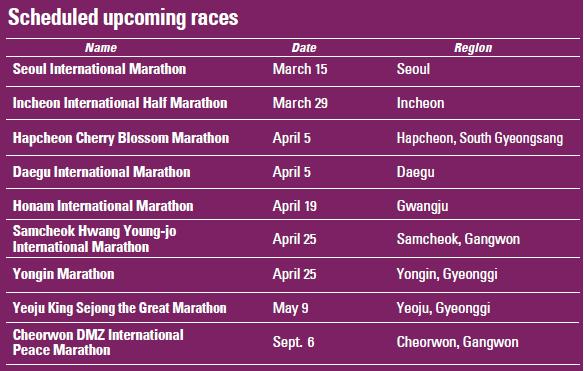 Local travel agencies as well have introduced new packages specialized to cater to marathoners. One of the country’s largest agencies, Hana Tour, has served as a pioneer in the lesser-known market. It has offered packages to Guam since 2013, and this year it introduced another tour that accommodates clients running in the marathon in Saipan, in the Northern Mariana Islands.

“We are diversifying our travel products so that people seeking out different experiences can find them,” said Oh Seung-hwan, an official on the agency’s communications team.

“Considering Guam is a popular destination for families with children, usually fathers in their 30s and 40s who run the race get discounts”

Some tourists opt to try running the races to get a discount on travel packages. Agencies typically give a better deal if at least one person in a travel group runs the marathon there.

However, the tide is changing.

“Unlike last year, the number of people who make running the marathon a priority - rather than relaxing on the beach - is increasing,” Oh said, adding that the agency is planning to introduce more tailored packages for other international marathons next year.

More serious marathon runners often travel even farther to Europe or America to compete with runners with years of experience. The World Marathon Majors, one of most well-known events that includes six full-length races, is dream for local runners who have run the same races over decades.

Races in Boston, Chicago, New York, London and Berlin was part of the league established in 2006, and one in Tokyo joined to bring the number of races to six in 2013.

These races are known to attract more than 300,000 participants, with around 5 million cheering spectators lining the streets.

Local travel agency Open Care, which is affiliated with Tour Operators United for Runners, a global cooperative union of sports travel agencies, arranges special travel opportunities for those who wish to venture father out and can afford to spend a little extra on travel.

Going out to the United States to run, for example, generally costs about 3 million won ($2,725) or more.