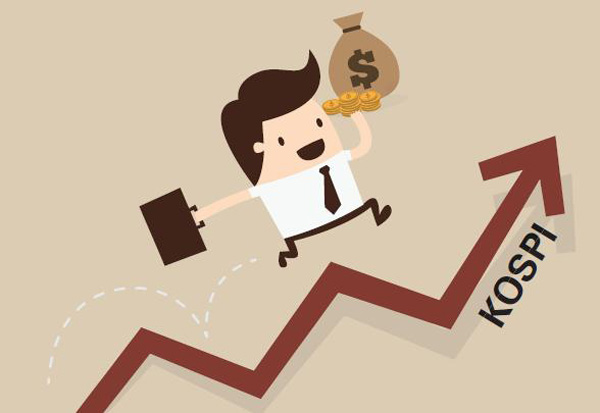 Foreign investors are making a comeback in the Korean stock market with remarkable buying sprees on the Kospi and Kosdaq, thanks largely to eased concerns about overseas markets.

Recent rallies both in the main bourse Kospi and secondary tech-heavy Kosdaq are attributable to overseas investors’ purchasing of local shares starting in February.

On Friday, the benchmark Kospi reached a five-month high of 2,012.94 owing to good news from the eurozone. The main exchange surpassed d 2,010 for the first time since Sept. 30.

Foreign investors bought about 280 billion won ($261.4 million) worth of local shares that day, their 10th consecutive day of buying.
Thanks to foreign purchases, the Kospi’s market capitalization soared to 1,253.1 trillion won, breaking its previous record of 1,250.3 trillion won set May 2, 2011. 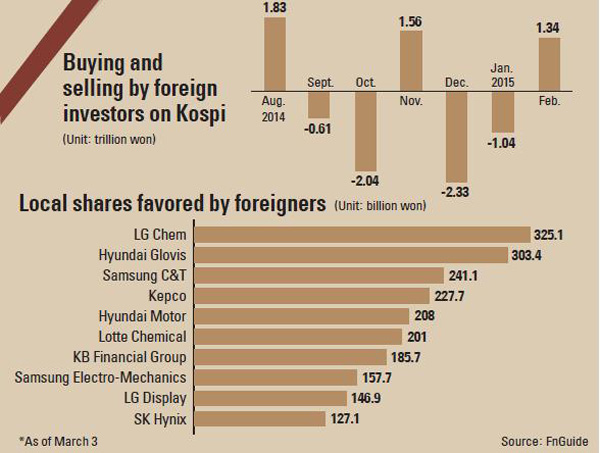 Investors flocked to the Korean market in response to news the European Central Bank (ECB) would start buying government bonds today. Every month through September 2016, 60 billion euros ($65.8 billion) will be released into the market.

The Kosdaq also reached 635.34 on Friday, its highest close in six years and nine months.

Analysts predict the current buying trend among foreign investors will grow even stronger.

“Looking back to past experience with the U.S. bond-buying program, it is highly likely the ECB’s quantitative easing measures can help attract foreign investors into the Korean market,” says Kim Yoon-seo, a researcher at KTB Investment & Securities.

Foreigners sold about 2.3 trillion won in Kospi shares late last year and an additional 1 trillion won in January, according to FnGuide, a leading provider of financial information.

They started buying in February. As of last month, foreign investors had purchased 1.08 trillion won worth shares on the Kospi, driving it above 2,000 on March 3 for the first time in five months.

“Eased concerns regarding Greece’s possible exit from the eurozone and China’s interest rate cut also helped bring foreigners back to the Korean market,” says Lee Chang-mok, head of the research center at NH Investment & Securities. “The trend is expected to continue for a while.”

Overseas investors favor chemical, construction and automobile shares. Those shares dipped sharply in 2014, but have recovered this year.

Among chemical shares, LG Chem is a favorite of foreigners. As of the first week of March, foreigners had bought 325.1 billion won worth of shares in the lithium-ion battery maker, even though the company performed poorly last year as oil prices plunged. But LG Chem stock has jumped nearly 27 percent this year.

Hyundai Motor also is a preferred Korean stock among foreigners. There is more room for the automaker to see price increases because its stock price has been underestimated due to slow sales last year.

“There are chances that those popular shares could see further price hikes while global funds are flowing into the market,” says Lee. “But we should be aware of when the U.S. decides to raise its key interest rate.”

Cumulative foreign holdings of listed stocks at the end of February came to 437.5 trillion won, accounting for 30.7 percent of total market capitalization.

Switzerland investors bought a total of 589.6 billion won worth shares, the top foreign investor group in the Korean market. Japanese and U.S. investors followed with about 270 billion each.

According to Bloomberg late last year, strategists predicted the Kospi index in 2015 would gain the most since 2010 as global economic growth picks up, won volatility ebbs and companies boost payouts.

Korea’s $1.2 trillion equity market will rally 14 percent this year to 2,183, according to the average forecast in a Bloomberg survey of 11 strategists at firms from Barclays Plc to Goldman Sachs Group, the news agency said.

Stronger overseas growth may spur demand for products of Samsung Electronics and Hyundai Motor after the nation’s largest exporters struggled to cope with exchange-rate swings against the Japanese yen and the U.S. dollar, it said.