Korea’s war over desserts gets its ammunition from Japan

Korea’s war over desserts gets its ammunition from Japan 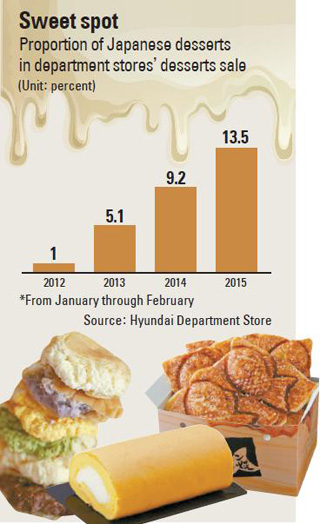 The vogue for Japanese desserts in Korea has reached a feverish level. With skyrocketing sales, local retailers have been battling to bring noted dessert makers into their department stores.

The dessert wars among retailers began with a competition to find matjip, which means “delicious restaurants” in Korean, from the Garosu-gil and Hongdae area, known for their diverse food scenes. The next fad was hunting down famous regional bakeries, and then foreign desserts.

Japanese desserts are the fourth realm of the battle.

The main Lotte Department Store opened a pop-up shop of Gateau Festa Harada, a Japanese brand famous for its signature rusks, a type of hard cookie made from thinly sliced baguettes. The store will be open from this Sunday to the following Saturday. In Japan, Gateau Festa Harada has long queues outside its outlets and 180 billion won ($163.9 million) in annual sales.

“The brand is one of the top five in terms of revenue in Japanese department stores amid all the fashion luxury brands,” said Lee Han-sang, a Lotte Department Store official. “We had to put in a lot of effort just to open the temporary store.” Gateau Festa Harada insisted that three of its Japanese employees manage the shop to maintain its strict standards, such as how to serve customers and offer samples.

Cream-filled buns are a core area of competition. The three major department stores - Lotte, Hyundai and Shinsegae - have launched outlets by Hattendo, a Hiroshima-based cream-filled bun maker famous for running out of stock in afternoons because their offerings are so popular. More than 6,000 buns were sold in each store on weekends. The launchings were on the same date, and each retailer insisted that it was the first to open the cream bun store.

In Hyundai, Mon Chouchou, a cake roll brand from Osaka, has been the top selling dessert since its launch in August 2013. In Shinsegae, Sapporo chocolate maker Royce had 600 million won worth of sales at Valentine’s Day, when Koreans presenting chocolate to their paramours. The high sales grabbed the attention of the local retailers.

Analysts say Japanese desserts have special appeal to Koreans. “The bland sweetness of Japanese treats is just right for Koreans,” said Cho Chang-hee, a buyer at Shinsegae. Compared to desserts from the United States or European countries, Japanese desserts are light in sugar and fat. Also, the wide variety of Japanese brands and products that have survived generations are quality-guaranteed.

“The fear of radioactive food after the 2011 earthquake and nuclear accident in Japan has receded,” added another retail official.

The geological closeness of the countries means fresher products and ingredients, as well as easier management for the retailers. High brand awareness among local consumers who visited Japan in the past is also a factor.

According to the retail industry, three or four more brands are planned for local department stores soon.