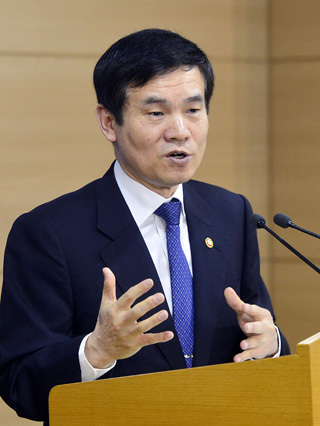 Lee Sung-bo, chairman of the Anti-Corruption and Civil Rights Commission, talks about the newly legislated anti-graft act on Wednesday. [NEWSIS]

When a sweeping anti-corruption bill was passed earlier this week, Lee Sung-bo, the chairman of the Anti-Corruption and Civil Rights Commission, could understand.

His predecessor, Kim Young-ran, submitted the initial draft to the legislature in 2011. The bill is intended to better tackle graft among public servants and those holding influential positions that affect public interests.

Both are graduated from Seoul National University’s Department of Law and passed the national bar exam in the same year.

But Lee has also played a key role in allowing the bill to find its way into the National Assembly.

“The anti-corruption law is necessary if Korea is to make a great leap in the future,” he said in a recent interview with the JoongAng Ilbo.

“By current standards in Korea, the law might seem a little excessive,” Lee continued. “It will have some damaging effects on different sectors but we need to overcome it together.”

According to the law, a public official will face criminal punishment for receiving money or favors worth more than 1 million won ($912) even if they are unrelated to his or her job.

Beyond bribes, entertainment like expensive meals, golf games and paid vacations is also covered by the law. A wide range of professions including civil servants, legislators, teachers at private schools and employees of media companies are covered because the law considers the nature of their work “public.”

Their spouses will also be covered.

The chairman added that the anti-graft law would benefit the Korean economy in the long run, despite the fact that lawmakers on Wednesday vowed to revise it.

“If we look at cases of developed countries, those kinds of laws contributed to those countries’ economies. In most cases, the richer the country is, the more transparent the country is,” he said. “So if the law is enforced well, Korea can also enjoy the positive fallout.”

He still feels that Korea has a long way to go, however, and this is why he is working on introducing different kinds of anti-corruption bills to the National Assembly.

Among them is a bill designed to impose heavy fines on those who misappropriate government subsidies. The bill will force law-breakers to pay a fine of up to three to five times the value of the money he or she pocketed.

“This kind of punitive compensation law is very common in the United States, especially in environment law,” Lee said. “If the law goes into effect, we can break down the perception that government money is easy to manipulate.”