Allies rally after attack on envoy

Allies rally after attack on envoy 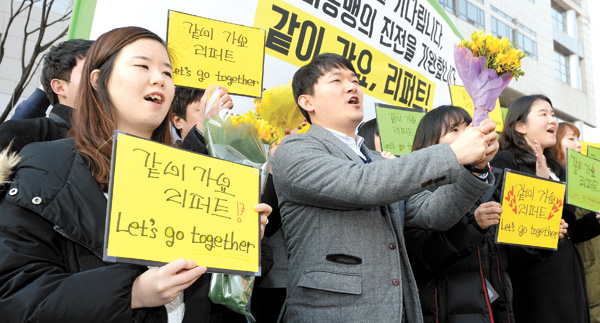 Members from a youth group gather outside Severance Hospital in Seoul to show their support and wish a speedy recovery for U.S. Ambassador Mark Lippert. [NEWSIS]

Following the brutal attack on U.S. Ambassador Mark Lippert by an anti-American nationalist, Koreans reacted with apologies and an outpouring of support for his recovery.

The assault of the popular young diplomat triggered Korean civilians, civic groups and government leaders to rally behind the hospitalized Lippert and reaffirm the strength of the Korea-U.S. alliance.

On Thursday morning, Lippert was attacked by a man wielding a 25-centimeter (9.8 inch) knife at a breakfast function in central Seoul, across the street from the U.S. Embassy. He sustained wounds to his face and left hand. 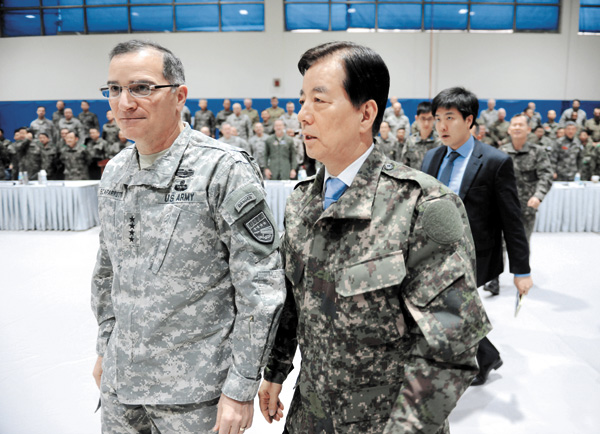 Prime Minister Lee Wan-koo visited the recuperating Lippert at Yonsei University’s Severance Hospital. “The South Korea-U.S. relationship will not be damaged by this kind of incident,” he told reporters afterwards. “Rather, the alliance should be further bolstered.”

Lee also said that U.S. President Barack Obama and the American people must have been shocked at the incident and that “this was a regrettable event that should not have happened.”

Defense Minister Han Min-koo on Friday visited a training site of the annual Key Resolve war games that kicked off Monday, where he addressed a group of American and Korean troops in Seongnam, Gyeonggi.

“North Korea through its response yesterday acknowledged they are a group acting against human rights,” said Han.

On Thursday Pyongyang lauded the attack on Lippert and said he “deserved punishment” for warmongering the United States. But the assailant was not believed to be acting for Pyongyang or on its orders.

“Kim Jong-un fears most the South Korea-U.S. joint drills,” Han said, calling the drills a cornerstone of the bilateral alliance for the past 60 years, aimed at containing enemy provocations and preserving security in Korea.

“An act of terror against the U.S. ambassador was the most obvious attack against the South Korea and U.S. alliance,” he continued.

Curtis Scaparrotti, commander-in-chief of the South Korea-U.S. Combined Forces Command, who also attended the drill, said that he did not see “the act of terror” as being reflective of the Korean people.

Lippert made an effort to reassure the general public that his feelings for Korea had not changed.

After undergoing two surgeries on Thursday, Lippert tweeted a positive message. Confirming he was in good spirits, he wrote: “Will be back ASAP to advance US-ROK alliance!” In Korean, he wrote “Let’s go together!”

That particular message had been retweeted over 4,700 times as of Friday evening.

More than 650 people posted comments on a blog Lippert writes about life in Korea.

Lippert’s Twitter followers also increased nearly tenfold after the attack and he had over 10,100 followers as of Friday afternoon.

Civic organizations gathered in front of the U.S. Embassy in Gwanghwamun, central Seoul, to express their support for Lippert, and brought hundreds of red carnations to represent the envoy’s home state of Ohio.

Hours after his surgery, despite having 80 stitches put in his cheek, he showed a smile to the medical staff and talked on the phone despite doctors’ concerns that talking and moving would strain his wound.

Several hours after his surgery, Lippert spoke with both President Park Geun-hye, who was on a trip to the United Arab Emirates, and Foreign Minister Yun Byung-se.

Because his cheek was slashed, talking causes great pain, according to a medical source, and could contribute to scarring.

Minister Yun initially text messaged him but Lippert said it was OK to call.

President Park on Thursday called the assault “an unacceptable attack on the Korea-U.S. alliance” and promised a thorough investigation.

U.S. State Department spokesperson Marie Harf also said in a statement, “The U.S.-ROK alliance is strong” and “will not be deterred by senseless acts of violence.”

She added, “Ambassador Lippert looks forward to getting back to work with his Republic of Korea counterparts to strengthen our bilateral relationship and to jointly address regional and global.”

Lippert, a former chief of staff for the Defense Secretary, took his post in Seoul late October, and has gained popularity for his public outreach through Twitter, his blog and frequent outings accompanied by his basset hound Grigsby. He and his wife Robyn are parents to a newborn boy who was born in January. They gave him a Korean middle name: Sejun.

A foreign affairs official told the JoongAng Ilbo, “Thinking about how Ambassador Lippert has shown extraordinary love for Korea, the word ‘sorry’ does not begin to convey the regret that we feel.”