Lippert will remain in hospital for several days

Lippert will remain in hospital for several days 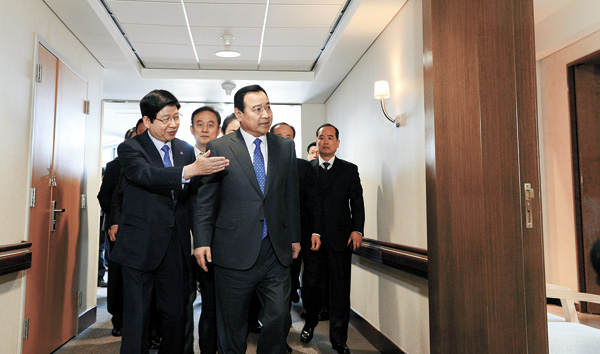 “We are getting rid of the stitches on his face on Monday or Tuesday and then will decide whether he may leave the hospital in a day or two,” said Severance’s General Director Yoon Do-heum on Friday. “The stitches on his arm are going to be removed about ten days later.

“Ambassador Lippert went to sleep at three in the morning and woke up at seven. He is doing well and goes around the room freely.”

Yoon added, “Lippert says he feels pain in the fingers on his left hand and the medical staff thinks it will get better in two or three days.”

The 42-year-old ambassador was slashed 11 centimeters (4.3 inches) on his right cheek and stabbed in his left wrist and fingers.

According to the hospital, the envoy’s temperature went up to 37.7 degrees Celsius (100 degrees Fahrenheit) after the surgery but went down to a normal range of 37.1. Even after having more than 80 stitches on his face, he had a western-style salad and toast for breakfast, said Yoon.

“He also seemed mentally stable and even worried about doctors and nurses,” said Yoon. “We are currently checking if he has a fever or infection and whether he has difficulty in eating, and we will mainly focus on healing his wounds.”

Lippert, who did not see any visitors on the day he was attacked and had surgery, was visited by newly appointed Prime Minister Lee Wan-koo Friday morning. Lee was assigned to deal with the incident as President Park Geun-hye is currently on a nine-day trip to the Middle East.

Lee stayed about ten minutes in Lippert’s room. He was accompanied by Minister Choo Kyung-ho of the Office for Government Policy Coordination and Vice Foreign Minister Cho Tae-yong.

“I came here to pass along wishes that he gets well soon,” said Lee. “I told him that the President is also worried and the alliance between the two countries should not be damaged due to the incident.”

The New Politics Alliance for Democracy Chairman Moon Jae-in is expected to visit Lippert next week. In a meeting at the U.S. Embassy on Friday, the minister-counselor, Mary Tarnowka, suggested Moon visit him at the hospital and he accepted the offer.

An elderly man showed up at the hospital early Friday morning carrying a dog meat dish and seaweed soup for the ambassador, traditionally considered good for convalescents. “We had to politely turn it down,” a hospital official said. Dozens of plants and flowers, sent by Seoulites, were sent to the U.S. Embassy.