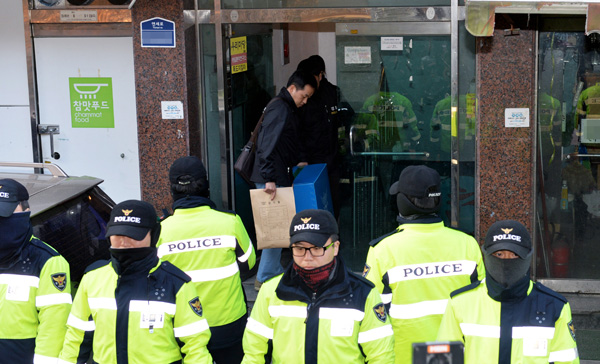 Police investigators move boxes of confiscated records Friday following a raid on the home and office of Kim Ki-jong, who attacked U.S. Ambassador to Korea Mark Lippert. Kim was arrested immediately after the attack on Thursday. [NEWSIS]

The prosecution on Friday formed a special investigation team made up primarily of national security agents to look into an attack on U.S. Ambassador Mark Lippert by a radical Korean activist.

According to the prosecution, the investigative team is led by Second Deputy Chief Prosecutor Lee Sang-ho of the Seoul Central District Prosecutors’ Office.

He is also joined by prosecutors from the 1st Public Security Division, in charge of National Security Law violations and terrorist incidents, as well as four additional prosecutors and 30 investigators from related departments.

Prosecutors on Friday also sought a pre-trial detention warrant for Kim Ki-jong, the anti-American activist who slashed the top U.S. envoy to Seoul in the face with a 25-centimeter (9.8 inch) knife on Thursday morning during a breakfast function.

“When Kim’s case is sent from the police, the team will be regrouped into an investigation squad headed by the chief of the 1st Public Security Division,” said an official on the team. “We are quickly dividing tasks before the case is forwarded so that the squad can focus on the investigation after we take over the case.”

The investigation team forwarded the detention warrant request for Kim from the police to the court, charging the activist with attempted murder, violence against a diplomat and obstruction of justice.

The prosecution is also considering indicting him on charges that he violated the National Security Law and noted that Kim often visited North Korea and participated in left-wing activities.

“We accused him of attempted murder given the wounds he inflicted on the ambassador and the way he did it,” an official on the investigation team said. “We are also planning to seek out charges that he violated the National Security Law.”

The Ministry of Foreign Affairs said on Friday that Kim had visited North Korea seven times - once to Geumgang Mountain in 1999 and six times to Kaesong from November 2006 to April 2007 for a campaign to plant trees in the border city.

The police added that Kim also attempted to set up a memorial altar for late North Korean leader Kim Jong-il in December 2011.

Authorities received a confiscation warrant on Friday and raided the activist’s residence, which doubled as his office, in Seodaemun District, western Seoul. The police are known to have seized hard drives and other documents to determine his motivations and seek out possible accomplices or a mastermind behind the attack.

Books against the state’s interest were found at his residence, police said, though Kim’s lawyer denied it.

As investigators raised the possibility that Kim might be a pro-North Korea activist, the New Politics Alliance for Democracy (NPAD) made efforts to distance itself from the situation and publicly stated that the assailant was acting as a free agent and had nothing to do with the opposition. The move was likely intended as damage control in light of the Supreme Court’s ruling in December to dissolve the far-left United Progressive Party, whose members were accused of planning to instigate a rebellion against the state in the case of war.

President Park Geun-hye, who is currently visiting the United Arab Emirates as part of an official trip to the Middle East, also made it clear that Kim’s actions were unacceptable and demanded a thorough investigation.

“It is shocking and unacceptable that the U.S. ambassador was attacked,” Park told her senior secretaries on Friday. “Kim’s extreme ideas - such as that joint military exercises be halted - go against the thoughts the majority of our people, who support liberal democracy.”