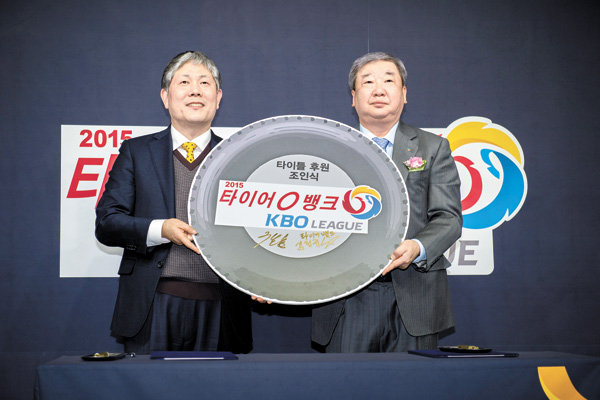 Baseball has been the hottest professional sports league in the country, but how much brand value does it have?

Since 2000, the Korea Baseball Organization (KBO) has sold the naming rights of its league. The KBO last Tuesday announced a three-year partnership with Tirebank to be its title sponsor. Although financial details weren’t disclosed, the deal is reportedly worth 7 billion won ($6.3 million) per year.

“Before sealing the deal, we negotiated about three months,” said Lee Jin-hyung, director at KBOP, the KBO’s marketing unit. “Several companies competed for the contract, but Tirebank was the best fit for a variety of reasons.”

The first title sponsor of the KBO League was Samsung Securities, which clinched the deal in 2000 for 3 billion won. In 2005, the main sponsor was changed to Samsung Electronics, promoting its Samsung PAVV television brand. Korea’s largest electronics company paid 4.5 billion won for three years.

After winning the gold medal in the 2008 Olympics in Beijing and finishing second in the 2009 World Baseball Classic (WBC), the popularity of baseball boomed in Korea. But the global financial crisis prompted Samsung to end its sponsorship.

At the time there were doubts about whether being KBO title sponsor was worth the money, but CJ Internet, which was promoting its online baseball game MaguMagu, stepped up to the plate in 2009 for 3.5 billion won.

Experts say the marketing value of the professional baseball league can be assessed starting from that year. Prior to the KBO League sponsorship, CJ Internet was the main sponsor of the 2009 WBC and reportedly saw big promotional results.

In 2011, Lotte Card sponsored for about 5 billion won, followed by Paldo at 6.5 billion.

But if the cost of sponsorship is growing, sponsors have been shifting from conglomerates to midsize companies. Korea Yakult, the sponsor for 2013-4, has annual revenue of 1 trillion won.

Tirebank, which operates 360 shops nationwide and claims to have about 15 million customers, is Korea’s No.1 tire retailer, but it is smaller than previous sponsors. The company, founded in 1991, has 1,000 employees and annual revenue of about 300 billion won.

“We thank the KBO for giving this opportunity to midsize companies like us,” said Kim Jung-kyu, founder and chairman of Tirebank, last Tuesday. “We were attracted by the many young people and women fans of this league and think we can secure new customers through KBO baseball.”

According to the latest data, which the KBO asked SMS Research & Consulting to analyze, Korea Yakult in 2013 saw its sponsorship create 103.4 billion won worth of value through media exposure. Although it is difficult measure the effect on brand value, KBO officials say baseball sponsorship is a solid opportunity for growing companies in particular.

“It is meaningful to sign the deal with growing midsize companies because this also provides an opportunity to measure the value of the league,” said KBOP’s Lee.

Insiders say the price of title sponsorships will grow as the quality of play improves. As sponsor of the English Premier League, British financial company Barclays pays 40 million British pounds ($60 million) a year.