[Cooking with Her Excellency, Germany] Sharing schnitzel and stories with Korea

[Cooking with Her Excellency, Germany] Sharing schnitzel and stories with Korea 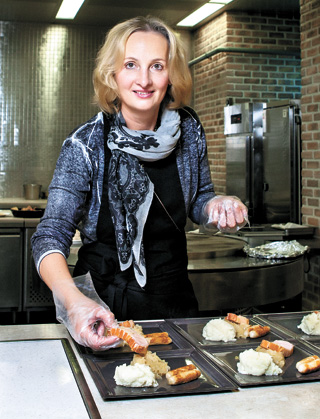 *Every great capital has a diplomatic corps representing their countries and promoting their own cultures. Ambassadors are expert entertainers and their spouses are often skilled at introducing the cuisine of their homeland to their foreign hosts. In this series, the Korea JoongAng Daily asks the spouses of Seoul’s ambassadors to introduce our readers to a favorite entree from their homelands.
In each installment, his or her excellency will be joined by a chef from one of the two InterContinental hotels in Seoul who prepares a Korean dish that complements the foreign offering. Mashitge deuseyo, guten appetit and bon apetit!


Christina Mafael, wife of German Ambassador Rolf Mafael, proved a multi-tasking cook as she took charge of a buffet kitchen at a hotel in southern Seoul. Tangy sauerkraut simmered in one pan and bratwursts sizzled and crackled in another pan until they turned a golden-brown.
When asked to choose one representative German dish, Mafael instead decided to prepare an array of popular meats and side dishes at the Grand Kitchen buffet restaurant at the Grand InterContinental Seoul Parnas in Gangnam District, southern Seoul, on Feb. 11. As the main dish, she prepared jagerschnitzel, or pan-fried pork loins, with creamy mushroom sauce. But she also cooked up some kassler (smoked pork), Nurnberger rostbratwurst (Nuremberg-style sausages) with sauerkraut and kartoffelbrei (mashed potatoes), all popular dishes that evoke her home country.

Mafael was joined by Intercontinental Hotel Executive Chef and Director of Kitchen Bae Han-chul, who has deep roots in German cuisine, having trained under a German senior chef. His prized possession is a sausage machine that he hand-carried from Germany back to Seoul a decade ago.

Mafael and Bae cranked out homemade wursts, or sausages, on the spot. But German-style wursts are now popular enough that they can easily be found in large supermarkets, or at gourmet delis in Korea, including at the Intercontinental Hotel.

“There are around 1,500 different kinds of sausages in Germany, and sausage consumption amounts to 50 percent of meat consumption in the country,” Mafael told the Korea JoongAng Daily. “The filling is everyone’s secret, with different flavor and spices.”

Because a meal isn't complete without dessert, Mafael also prepared in advance a home-baked traditional German Black Forest cake, Schwarzwalder Kirschtorte. Mafael enjoys baking in her spare time, and this delectable moist cake, which takes full day to prepare, is fine-tuned from her own family recipe passed down from generation to generation.

Bae in return made bossam, or boiled pork, with Korean kimchi salad.

While Germany may be best known for its beer, Ambassador Rolf Mafael, who joined the cooking session, said because he grew up near the French border, he was more accustomed to drinking wine with his meals. “My father grew his own vineyard,” Mafael said. “When I was a child, our family had a garden where we grew our own potatoes, raised hen for eggs, produced honey from beehives. Every autumn, my father went to a farmer to buy a pig, and we slaughtered it in January. We knew everything about the quality of the meat.” 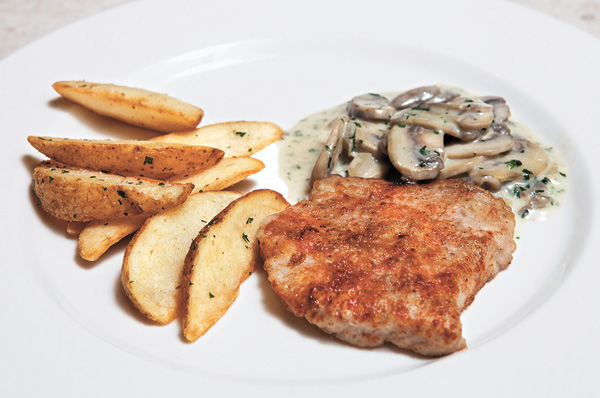 Q. Why did you choose jagerschnitzel as today’s dish?

A. I suggested jagerschnitzel, or pork loins, because Korean people like meat. They can be served with creamy champignon mushrooms - best if brown and white are mixed. There are many German dishes to choose from, but I wanted to choose one which can easily be prepared by the Korean people with ingredients found here, in a short time.

Can you describe your country’s cuisine?

Today in our cuisine, there is very much European fusion and international influences including Asian elements. However, traditionally, typical German cuisine is comprised of only one warm meal a day, namely lunch. Bread also plays a very key role in our meals, with more than 300 different types. Dinner can often be comprised of bread, cheese and wurst. Of course, the most typical German food is wurst, of which the most important is bratwurst [fried sausages]. But others include leberwurst, or liver sausage, blutwurst or blood sausage or black pudding; sausage from ground pork, mettwurst; as well as salami and smoked ham, such as Black Forest. Other specialties include cakes, such as the Black Forest cake. It is very typical on a Sunday to have coffee and cake in the afternoon.

Does the ambassador cook?

When I first met him, he cooked. He tried a lot and cooked really exotic dishes, like Chinese food. But the more he worked the less he cooked, and it’s been about 10 to 15 years since he stopped cooking. But he still enjoys slicing a prepared turkey, though.

In the past, it was rather difficult to find German restaurants in Seoul, one exception being the well-established “Baerlin” in the Somerset Palace Hotel [Gwanghwamun, central Seoul]. In recent years however, more and more restaurants have opened up, a trend going hand in hand with the growing popularity German beer in Korea. There are two “Krombacher Haus” restaurants run by Krombacher brewery: one in Gangnam-daero, Gangnam District, and a second one near Yangjae Station in Seocho District [southern Seoul]. As I explained earlier, bread plays an essential role in German food culture. It is therefore not surprising that there are also several German style bakeries in Seoul, like “The Bakers Table” in Itaewon, “Ach So!” in Hanam-dong or “Wood & Brick” near Gwanghwamun, just to mention a few.

Any personal observations about Korea?

I enjoy going to Korean restaurants, sitting on the floor. I enjoy samgyeopsal [pork belly] with my family, and especially love jeongol [Korean hot pot], with different toppings like chicken, fish or sausages.

1. Chop onion, then clean and cut mushrooms into slices.

2. Clean and dry the pork loins. Hammer them out to be tender and around 1 centimeter (0.3 inch) thick, or for preference.

3. Season loins with salt, pepper and paprika to taste. Coat with flour, shaking off excess.

4. Heat margarine, butter or oil in a pan over medium-high and cook the loins for 10 minutes, turning occasionally. Remove and set aside, keeping them warm.

5. Fry the onion and mushrooms in a pan over medium-low, stirring constantly. When reduced, add the cream, salt and pepper to taste. Serve the loins with the mushroom sauce and garnish with chopped parsley.

May also be served with French fries or a green salad