Rainbow returns after a long hiatus

Rainbow returns after a long hiatus 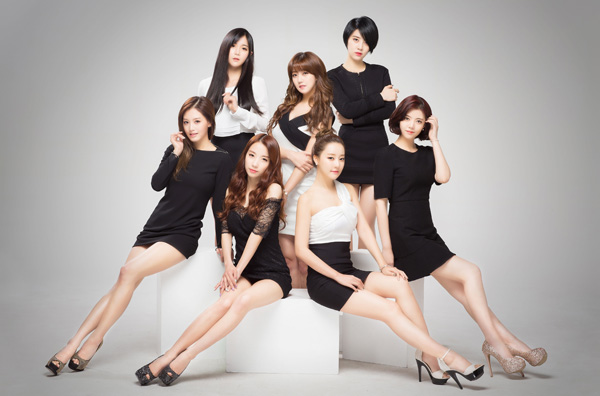 In the fast-paced world of Korean pop, singers can quickly fade into history unless they continue to release new albums.

So to stay relevant, many groups release mini-albums in intervals to keep their place in a sea of similar acts.

Most entertainers unveil at least two or three mini-albums per year.

Due to the nature of the industry, Rainbow’s year and a half absence from the music scene was likely an intimidating hiatus. With the release of their new album delayed, it was rumored that the group had broken up.

However, the girls, who celebrated their seventh anniversary this year, returned late last month with the new mini-album “Innocent,” thus resuming their singing career.

With this album, the girl group, which has always existed somewhere between the top and the bottom, wants to cement a true identity.

The following is an excerpt of a recent interview with Rainbow’s seven members:

Q. It’s been a long time since you performed as Rainbow. How do you feel about coming back?

A. Kim Ji-sook: We’ve been working in this industry for seven years and we couldn’t be the same as before [when releasing this album]. We also weren’t confident enough to compete with new girl groups. We had to be unique, and this album is the outcome of that.

Kim Jae-kyung: I thought about [our own identity] during our break and realized we didn’t present any particular image [to the public] compared to other girl groups. Through this new album, we were tasked with achieving our own identity.

What kind of identity do you want to convey with this album?

Cho Hyun-young: Ladylike, bubbly images don’t suit to us. I hope each of us could be recognized as a skillful singer.

Why did it take so long to release this album?

Kim Jae-kyung: That was not something we could decide on. But each of us has been living life to the fullest by preparing for a possible comeback over the past several months.

It’s your seventh year together, but you haven’t performed that much as Rainbow. But you are still remembered by many music fans.

Cho: I appreciate all the people who remember us. With such a long absence, it’s difficult not to be forgotten.

Kim Ji-sook: Each of us tried hard to keep in touch with our fans through social media when we weren’t performing.

Kim Jae-kyung: I think we were lucky because we debuted when people began using smartphones and social media. We didn’t let go of our fans by updating them via Twitter and Facebook.

What did you do during the break?

Kim Jae-kyung: Some of us performed as Rainbow Blaxx [a sub-unit group of Rainbow] and did drama series and variety shows. I also wrote a beauty column on the web. By doing so, I could talk to more female fans.

Cho: It was fun to perform as Rainbow Blaxx, but I always missed performing as the whole Rainbow.

How did you feel when you watched other groups performing on TV music shows during your downtime?

Noeul: I always miss performing on stage because we haven’t performed that much for a group that has been around for seven years.

Cho: Once I thought to myself, “Each of us is talented, but only a few opportunities are given to us.’

Oh Seung-a: People may think singers perform on stage to entertain the audience but many of us get positive energy from them. It’s a good job.

Tell us more about your title track “Black Swan.”

Cho: It’s a unique and addictive song in a way that it unfolds its melodies. It’s hard to define the genre of the song. It’s kind of between a dance song and medium-tempo, and it also has some elements of electronic dance music.

Kim Jae-kyung: In the beginning, you may think, “What’s wrong with this song?” or you might think, “Is this really Rainbow?” when the song reaches its peak. And you will surely have this song stuck in your head when you go to bed.

How would you assess yourself in the music scene?

Kim Jae-kyung: We’re not definitely No.1 but we’ve been loved by fans for seven years. Our career hasn’t been that excellent but we have been growing up little by little.

Kim Ji-sook: We’re like a gomguk stew that has been boiled for a long time.

Is there anything that you want to achieve with this album?

Kim Jae-kyung: We’ve already set our goal. We hope we can promote three songs [from this mini-album] because we’re confident with all the tracks.