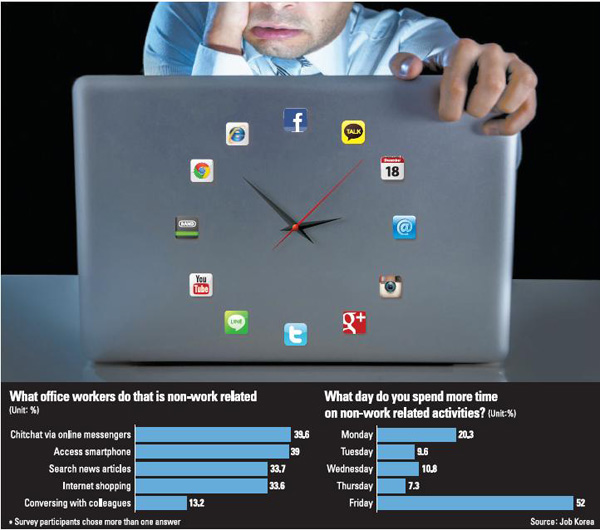 The first thing a 41-year-old worker whose family name is Lee does when arriving at the office is turn on his computer and surf through the latest news or hot issues.

During the day, he searches recreational woodcraft, which is his hobby, or collects travel information. He chats with friends using KakaoTalk’s PC version or other instant messengers. Sometimes he just sits empty-headed. When there is an LPGA tournament and his favorite player, Choi Na-yeon, appears, he watches on the Internet.

“It seems I spend an hour and a half to two hours doing things not related to work during the day,” Lee says.

Roland Paulsen of Lund University in Sweden has a term for this slacking at work: empty labor.

In his study of workers in Sweden, many spend an average of two hours on personal affairs each workday. The most frequent empty labor involved chatting on instant messengers, surfing the Internet, and vacation travel research and reservations.

According to a Job Korea survey of 611 office workers in September 2013, nine of 10 said they spend some time on empty labor.
Chatting was the most common empty labor, ahead of spending time on their smartphones, Internet news searches, Internet shopping and socializing with colleagues.

Job Korea’s survey also showed the average time spent on such non-work activities was 59 minutes and 21 seconds per day.

Among non-executives, department heads spent an average of 55 minutes per day, while lower-level employees, including new recruits, spend 57-61 minutes.

Is it the stress of fierce competition that causes employees to spend time on such non-work activities?

Paulsen says no. In his study, employees who were considered major slackers engaged in empty labor for more than half of the workday. It turns out most of them were overloaded with work, but they considered their jobs boring and meaningless.

There is a growing tendency for people to want to spend less time on work and enjoy life.
One of the biggest challenges that modern society ? including Korea, which is known for strenuous work hours ? faces is to find meaning in jobs.

Paulsen noted that people who are spending time on empty labor aren’t necessarily lazy, but they want to engage in something they see as productive.

The time spent on empty labor increases with more education, higher pay and companies that offer a high degree of workplace freedom.
Paulsen said this is because the time and effort necessary to accomplish tasks is difficult for management to determine.

Empty labor is much less common among lower income production workers since they are frequently monitored closely by management.
Paulsen says trying to force employees to reduce their empty labor activities by regulating Internet access or tightening management control is not a good way to solve the situation. Instead, it is important to ensure that the work in which employees are engaged is meaningful.
In fact, some argue that engagement in empty labor is not always a bad thing. Bill Coleman, vice president of Salary.com, contends empty labor can provide an opportunity for employees to come up with new ideas and contribute to a positive work environment that is friendly and fun.

Lee Geun-myeon, head of the Ministry of Personnel Management, once stressed that work alone doesn’t increase productivity.
With more people accessing the Internet to engage in activities that are not related to their jobs, some IT companies are introducing products that could hide such activities from the sharp eyes of bosses.

KakaoTalk’s PC version has a feature where the chat room actually looks like Microsoft Office Excel. This allows employees to engage in a conversation with friends, family or significant others, and at a glance no one can actually tell.
It has been years since employees started using Ctrl-Alt-Tab to quickly switch windows on their computer screens when their bosses come near. But the taskbar still indicates what programs are operating. A “boss key” helps solve this problem by hiding the taskbar.