The National Museum of Korea has been working on digitalizing the Uigwe books that detail the protocols of royal ceremonies and the rites of the Joseon Dynasty (1392-1910). Provided by the museum

For a highly digital country like Korea, it makes sense that the nation’s cultural heritage items are available to view in cyberspace.

But given its 5,000-year history, its 800 public and private museums and the tens of thousands of artifacts in their collections, the task has not been a piece of cake.

One of the larger tasks being undertaken by the National Museum of Korea is the digitization of the Uigwe books that document the protocols of royal ceremonies and rites during the Joseon Dynasty (1392-1910) in extreme detail and with intricate drawings. 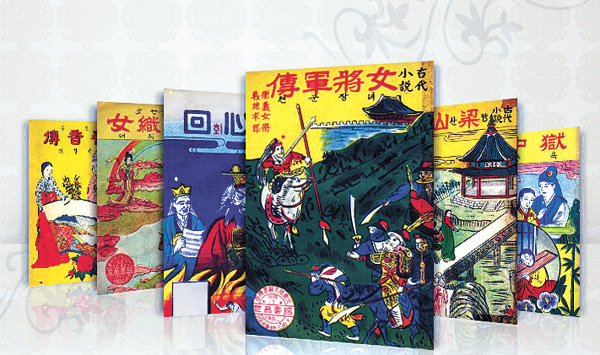 Digitalization is also a priority for the National Library of Korea. Most recently it signed a deal with Naver to add early 20th-century novels to the web portal’s encyclopedia service. Provided by the library

The National Library of Korea’s is also archiving ancient documents, books and maps online as one of its key projects. Most recently it announced that it has signed a memorandum of understanding with Naver to provide the approximately 1,000 rare documents in its collection to the encyclopedia service of Korea’s No. 1 web portal.

All this is being made possible as the country’s Ministry of Culture, Sports and Tourism has secured a larger budget for this year to develop a comprehensive digital database for the country’s most important relics.

For a king’s eyes

In 2011, France returned the 297 volumes of the Uigwe books that troops from the nation took in 1866 when they invaded Ganghwa Island in retaliation for Korea’s earlier persecution of French Catholic missionaries.

The books have toured various institutions since their return to be enjoyed by the Korean public.

The National Museum of Korea, based in Yongsan District, central Seoul, has been digitalizing the Uigwe books since 2014. It announced on March 4 that it recently uploaded another 100 volumes, pushing the total number of the online archives to 222 out of 297.

The museum said it has also significantly upgraded the website, adding several new functions. Users can now freely shuttle between vertical viewing and horizontal viewing; click on any writing or drawing to find definitions; and read a PDF on the artistic and intricate process of how the Uigwe literature was created.

“Most of the Oegyujanggak version of Uigwe books [that France returned] were for king’s eyes,” said Lee Han-na of the museum’s archaeology and history department.

Koreans created several versions of Uigwe, including one for the reigning king, and kept them in four different places to prevent them from being destroyed.

But the king’s version was the finest.

“The technique of binding the cover and the pages was both a decorative art and a sophisticated technique that determines the character and value of the books, and it is attested through various records that the materials used in binding the king’s version were far superior compared to those used in making other versions,” Lee said.

The digitalization of all the Uigwe books is expected to be completed by next January.

The archives can be viewed online at http://uigwe.museum.go.kr.

The National Library of Korea in Seocho District, southern Seoul, announced on March 2 that about 1,000 of the old, rare books in its collection will be available to view on Naver’s encyclopedia service starting June.

Ttakji refers to folded paper that Korean children used to use in the traditional game ttakji chigi.

One player places a ttakji - which is usually made from colorful paper - on the ground and the other throws a ttakji at it. If the ttakji on the ground flips, the thrower wins.

Ttakji novels were popular among Koreans in the early part of the 1910-45 Japanese colonization for being light and cheap. They are well-known for their covers, which were colorful, rough and even childish, hence the name ttakji.

The library will also provide 120 ancient maps on the encyclopedia service.

The institution has been active in digitalizing the cultural heritage in its collection. In October it announced that it has uploaded about 478 Korean newspapers from between 1924 and 1950 to be viewed freely on its website, www.dibrary.net.

“The articles show sharp discord between the liberals and conservatives after the liberation from Japan as well as Koreans’ views on world politics and economy,” the library said in a press release, adding that they will be useful material for research as well as for various content businesses such as television dramas or movie production companies.

Since the early 2000s, various state-run institutions have been working on digitalizing their cultural content, including the Korea Creative Content Agency, the Advanced Center for Korean Studies and the Institute for the Translation of Korean Classics.

But the National Library of Korea, which has a permanent collection of about 10 million books, has been one of the most active.

In 2009, it even opened a separate building dedicated to its digital archive. Insiders say digitalizing old Korean documents kept overseas is a part of the online archiving initiative that it is highly invested in.