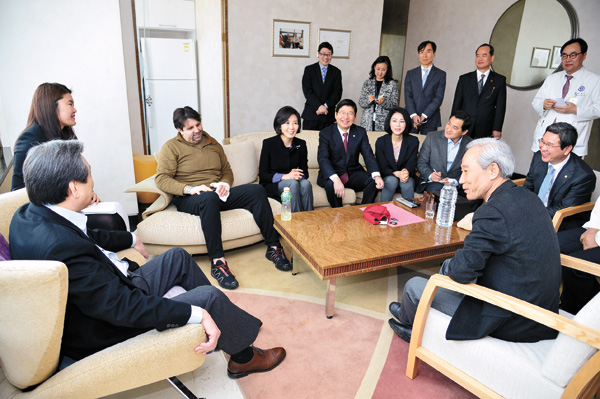 Leaders from the country’s ruling and opposition parties paid a visit to U.S. Ambassador to Korea Mark Lippert on Sunday, lauding his resilience despite wounds sustained on his cheek and left arm after a knife attack last week by an anti-American activist.

Tensions between the party chairmen were evident, however, particularly over who was to blame for the incident, with the ruling Saenuri claiming that the opposition bore partial responsibility because it once acted as a “host” for pro-North leftists like attacker Kim Ki-jong.

Saenuri Chairman Kim Moo-sung visited the wounded ambassador first on Sunday morning at Yonsei Severance Hospital, where he told Lippert that the accident only confirmed the strong alliance between Washington and Seoul.

“I told him that even though the accident was carried out by pro-North leftists in the country to undermine the Korea-U.S. alliance, it nevertheless has confirmed the strong foundation of the alliance between the two,” Kim told reporters outside Lippert’s hospital room after he and other party officials met with the ambassador.

He added that he and the Korean public were deeply moved by the resilience Lippert and his family had shown since the assault.

In response, Lippert was quoted by Saenuri spokesman Park Dae-chul as saying that the incident had not only been an attack on him, but also the United States, and expressed his desire to further strengthen bilateral ties.

Kim’s remark concerning “pro-North leftists” in the country, whom he argued had sought to weaken bilateral ties through the attack, came as police have accelerated their investigation to find evidence to charge the suspect with violating national security.

The police have requested that experts examine 22 books confiscated from Kim Ki-jong’s office to determine whether they contain chapters praising the North Korean regime - a clear violation of the National Security Law, which forbids South Koreans from possessing materials supportive of Pyongyang.

The 55-year-old suspect slashed the ambassador, a confidant of U.S. President Barack Obama, in an apparent protest over the ongoing joint military drills between the United States and South Korea, claiming it would aggravate inter-Korea relations and damage peace and stability on the peninsula.

Kim Ki-jong reportedly told the police that he had used the books in question for his master’s program in North Korean studies.

The Saenuri specifically blamed the main opposition New Politics Alliance for Democracy (NPAD) for having formerly worked with what it described as blinded Pyongyang followers like Kim, citing its campaign alliance with the now-defunct Unified Progressive Party (UPP) in the 2012 general election.

Last year, the Constitutional Court ordered the dissolution of the leftist political party for its pro-North Korea doctrine and removed all five of its lawmakers from the National Assembly.

“It’s no secret that the opposition has worked with the pro-North faction,” spokesman Park said on Sunday during a briefing at the National Assembly, adding that Kim Ki-jong had visited North Korea seven times and was hired by the state-run Institute for Unification Education, all during the liberal Roh Moo-hyun government.

Rep. Park also went so far as to say that the NPAD had served as a “host” in the past to harbor pro-North followers like Kim, and demanded that the party reflect on its past misdeeds.

During his meeting with Ambassador Lippert, NPAD Chairman Moon Jae-in also stressed that the incident should not interfere with ties between Seoul and Washington and said an act of terror should never be tolerated. “I told him this incident should not weaken the friendship between the two countries and wished that it could instead work to upgrade the relationship to a new level,” the opposition leader told reporters after the meeting.

Regarding the Saenuri’s comments concerning its past cooperation with the UPP, Moon insisted that the incident should not be used for political purposes, saying, “Using this incident to score political points will not help bilateral relations.”

But while the NPAD cautioned against using the attack on Lippert as a crusade against pro-North elements, stressing that it was an isolated incident, worries have grown within the opposition that the public could side with the Saenuri’s argument that it allegedly helped nurture the pro-North faction. It’s also possible that some of its own lawmakers may have worked with the suspect in the past on North Korean issues. Kim Ki-jong is currently facing a range of charges, including attempted murder.

Yoon Do-heum, the head of Severance Hospital, added that Lippert was on a fast track to recovery and may be discharged as early as Tuesday after 80 stitches in his cheek are removed.