President wraps up her trip to the Middle East

President wraps up her trip to the Middle East 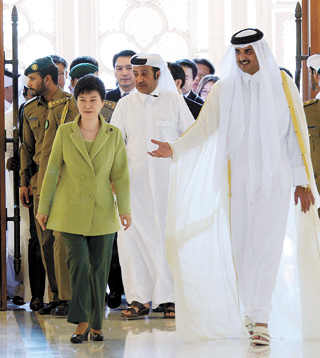 Infrastructure construction orders for the upcoming football tournament are set to cost around $100 billion, and Korean companies are highly likely to be given the chance to engage in various projects estimated to total $42 billion.

The projects range from a long-distance railroad, thought to cost about $15 billion, to $14 billion worth of general roads and wastewater disposal facilities. The opportunity to take part in the construction of a crossing bridge and a World Cup stadium would also be open to Korea.

Qatar will be the first Arab country to host the World Cup, and it is the first time the global sporting event will be held in the Middle East.

The two leaders also signed seven memoranda of understanding (MOUs), including one regarding diplomatic training for both countries.

This was the second time the two met since Qatar’s ruler first visited Seoul in November last year to have a one-on-one meeting with President Park. Both nations celebrated 40 years of diplomatic ties last year.

Throughout her trip, which began March 1, Korea signed 44 MOUs regarding business and the economy.

“The focus of the MOUs has been much more diversified this time: to service and knowledge, from energy and construction,” one senior secretary to the president said in a briefing. “The four Middle Eastern countries have been scrambling to diversify growth engines, and our efforts to cater to their needs worked.”

While the first Middle East boom mostly focused on the energy industries and construction, the second boom, which began in the late 2000s, has expanded to other fields like manufacturing, ICT, education, medical treatment, finance and trade, the Blue House said.

Korea has risen as one of the most-favored destinations for foreigners seeking medical treatment, and Middle Easterners are no exception. More than 3,500 people from the oil-rich Gulf region visited Korea on medical tours in 2013, up 54 percent from the previous year, according to data from the Blue House.

This time, Park was accompanied by a retinue of 116 business delegates, the biggest for any of her overseas trips. One-on-one counseling at business forums contributed to crunching 1 trillion won ($899 million) worth of 44 business contracts with participation of 115 Korean companies.

The president kicked off her first overseas trip of the year in Kuwait, which was followed by Saudi Arabia, the United Arab Emirates and Qatar. She returns to Seoul on Monday.