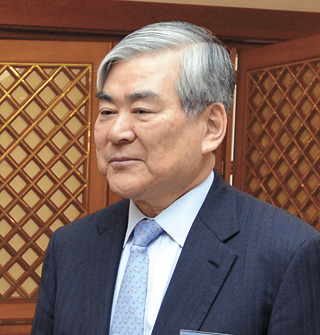 The head of the 2018 Pyeongchang Winter Olympics Organizing Committee confirmed on Monday that barring a natural disaster, the quadrennial event will not be shared with other cities.

In a press briefing Monday at the National Museum of Modern and Contemporary Art in Seoul, Cho Yang-ho said co-hosting the event is not under consideration.

“If there is a natural disaster which makes it impossible for the city to host the sports event, we could think of it as an alternative, but there is no sharing of the event,” he said.

Cho, however, said the co-hosting talks with North Korea as well as Pyongyang’s participation in the event is a political matter for the government and Korean Olympic Committee.

Since the International Olympic Committee (IOC) in December passed a package of reforms called Olympic Agenda 2020, which includes the option of an Olympic host city to stage the event with other cities or neighboring countries to save costs, Pyeongchang has been the subject of speculation it would co-host the Winter Games.

“The IOC says that you could share the events, but it’s not a must,” said Cho. “If that was decided about a year ago, we might have seen some impact, but in a situation where infrastructure construction is under way, co-hosting would be difficult.”

This organizing committee has consistently denied there will be sharing.

“Building a new stadium and facilities doesn’t mean you can host the event,” said Cho. “You have to consider other infrastructure, communications, transportation and human resources. But these things weren’t even reviewed before there was talk about co-hosting.”

Cho, who is chairman of Hanjin Group, said further talk about sharing venues would not be good for Korea’s credibility in the international sports community and it is time to focus on the task at hand.

The 66-year-old said he traveled to Rio de Janeiro last month for an IOC Executive Board meeting and met with IOC chief Thomas Bach to clear up any misconception about co-hosting.

Cho said the organizing committee made presentations and the IOC has no significant concerns about preparations in Pyeongchang, and there were some media reports which caused “misunderstanding” on the part of the public.

Regarding the controversy of Ministry of Culture, Sports and Tourism’s plan to change snowboard and freestyle ski venue from Bokwang Phoenix Park to High1 Resort for cost reasons, Cho said that the issue is now wrapping up.

“It is decided that Bokwang will be the venue for upcoming test events,” he said. “Although there will be additional negotiation, I see that both side are cooperating each other and will be wrapped up nicely.”

Concerning the controversy regarding the ski jumping venue at Alpensia Resort in Pyeongchang, which was criticized for safety reasons because of its strong wind, Cho said the committee is not thinking about changing venue or building a new facility.

“We think upgrading the current facility is enough,” he said.

Cho said now is the “golden time” for preparing the quadrennial event and there is no time to waste. He said that various parties are working to make the event successful, saying the Federation of Korean Industries, the business group for conglomerates, has estrablished a task force to come up with sponsorship plans.

“We are still worried about human resources and financial problems,” Cho said. “The ministry, Gangwon regional government and the committee should be a trinity.”