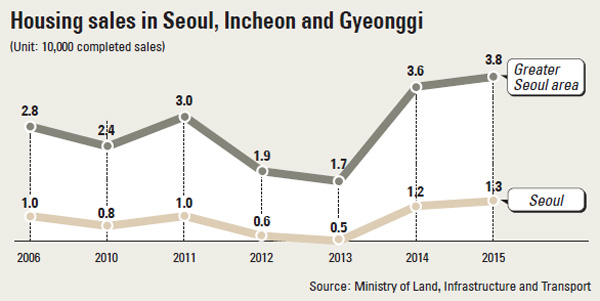 Housing transactions in Seoul and Gyeonggi rose to their highest levels in nine years in February, mainly boosted by soaring jeonse prices and low interest rates, the government reported Monday.

Seoul sales were up 10.4 percent year-on-year to 12,990 and 4.3 percent in Gyeonggi to 37,502, according to statistics released by the Ministry of Land, Infrastructure and Transport.

The report noted the record sales came despite fewer business days in February because of the three-day Lunar New Year holidays, and they were the highest since the government began tracking housing sales in 2006.

“The demand for jeonse [lump sum] rentals is turning into home sales,” said a Land Ministry official. “Although sales nationwide dropped, we see them as effectively rising considering there are usually about 3,000 sales a day and there were three holidays in February. The gap in sales between February 2014 and 2015 was less than 1,000.”

As of February, average apartment prices in Seoul, Incheon and Gyeonggi stood at 257 million ($231,323) while average jeonse deposits recorded were 224 million won for a two-year contract, reaching 87 percent of the average cost of buying, according to statistics from the state-run Korea Appraisal Board.

The average price of non-apartment, multifamily houses in the greater Seoul area, including Incheon, was 165 million won, about 92 million won cheaper than those of residential apartments.

Sales of residential apartments, which are typically more expensive than other types of housing, dropped 1.6 percent nationwide from a year earlier, while transactions involving studio apartments, single-family houses, and units in buildings of four stories or less rose 5.3 percent.

Much of the increase in sales was due to so-called “effective demand” from buyers who plan to be owner-occupants and are seen as pushing up prices for non-apartment units, the report said.

The increase in effective buyers can be surmised from dropping housing prices in Gangnam, an affluent area in Seoul where many speculators purchase apartments awaiting reconstruction despite sky-high prices.

According to the report, average prices of a 42.55-square-meter (458-square-foot) Gaepo Jugong Apartment unit in Daechi-dong, southeastern Seoul, fell by 7 million won in February from 689 million won in January. The apartment is regarded as a market bellwether for Gangnam real estate because of its popularity with speculators.

“Those who lived in jeonse residential apartments can’t afford the deposits anymore and are moving to relatively cheap multi-family units or regions outside Seoul,” said Kim Eun-jin, a real estate analyst at r114.com. “At least until the second quarter of this year, housing prices are expected to go up, particularly for newly built apartments in Gyeonggi.”