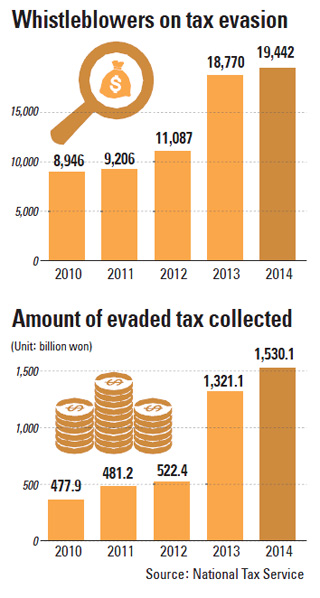 The CEO of a processed food company evaded a lot of taxes by receiving sales-related payments in bank accounts opened up in the names of employees and relatives.

Through the tax evasion, he lived a luxurious life. He bought a high-end apartment in his wife’s name. His children studied abroad at expensive schools.

But the National Tax Service was able to expose him - thanks to a whistleblower within his company.

A man who runs a machinery equipment manufacturer wants to back a company being run by his children - but doesn’t want to pay any inheritance tax among others taxes.

This scam was also uncovered thanks to an inside informant.

The owner of a bar avoids tax by putting his revenues in a bank account opened in an employee’s name.

This too was busted by a whistleblower.

The National Tax Service collected a total of 1.77 trillion won ($1.60 billion) in evaded taxes last year thanks to whistleblowers.

According to the NTS on Monday, there were 19,442 reports of tax evasion last year, which is a 3.6 percent increase from a year earlier.

Additionally, it received 12,105 reports from whistleblowers on bank accounts being operated under other people’s names, which was 37.6 percent more than the previous year. As a result the tax office was able to collect 243 billion won in tax evaded through those bank accounts, a 109.7 percent surge over the previous year.

Since early 2013, the government has been ramping up its war against tax evaders, which was a campaign promise by President Park Geun-hye. Cracking down on the so-called underground economy was a way for the president to pay for expanded welfare programs.

The NTS has called for more aggressive whistleblowing and raised its rewards.

Starting in 2014 the tax agency raised the maximum reward for tax evasion reports from 1 billion won to 2 billion won.

With the bigger rewards, around 330 whistleblowers were said to have been compensated last year.

This year the NTS has increased the compensation limit from 2 billion won to 3 billion won. Whistleblowers reporting bank accounts in other people’s names have been receiving 1 million won for each report since February, up from 500,000 won previously.

“We will create an environment in which it will be easier and more convenient to turn in a report [on illegal tax activities],” said an NTS official.