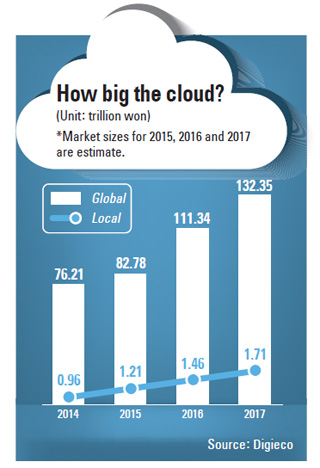 After the National Assembly passed the Cloud Computing Industry Promotion Act last week, the public sector is allowed to purchase cloud data management systems from private software developers of all sizes, opening opportunities not just for large IT companies but also for midsize companies and start-ups.

Scheduled to go into effect in September, the act encourages all public institutions - about 10,000 organizations under the central government, public enterprises, hospitals, schools and universities - to base their software system in the cloud, or remote servers. With the cloud act, institutions will be allowed to simply rent out software at a cheaper price than maintaining their own computer systems and servers.

Hefty amounts of public data will be stored on cloud networks managed by private companies, opening a huge new market for all kinds of IT companies including network infrastructure builders, data managers and software developers. 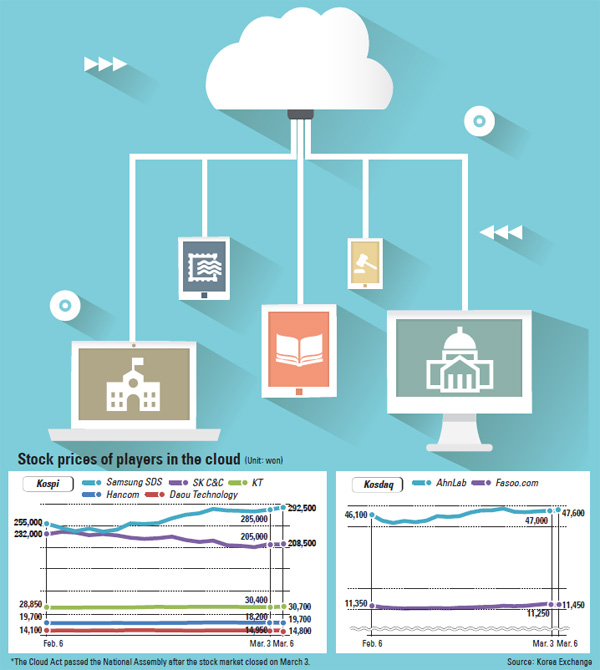 With the passing of the cloud act, the market is forecast to grow more than 30 percent every year, said the National IT Industry Promotion Agency.

The local cloud computing industry is a small, almost unexplored area in IT.

The initiative to help it grow was started by President Park Geun-hye, who said cloud technologies will help revitalize a sluggish local software industry - in particular small companies and start-ups.

The Ministry of Science, ICT and Future Planning will offer financial incentives for small cloud software and network developers, from a current-level of about 10 billion won, and provide tax exemptions for spending and technical assistance. Small developers will get top priority in tenders for government-led cloud computing R&D projects. State-run research institutes will also offer technological training to their employees.

The act says that the government must provide money, technology and talent to small companies to boost the quality of data and network security.

Incentives will also be offered to large local or global IT companies particularly when working on joint projects with small developers or when launching small IT start-up nurturing programs.

“The government hopes foreign companies won’t hesitate to participate in public procurements,” said Seo Seong-il, head of the software integration department at the Ministry of Science, ICT and Future Planning, in a phone interview.

“Any businesses that foreign IT companies do after the cloud act takes effect will be able to benefit from tax cuts [on employees’ income taxes and corporate tax] provided by the Ministry of Trade, Industry and Energy indirectly,” Seo said. “This is an indirect form of government incentive.”

When it comes to security, the cloud act requires data owners to sign an agreement with providers stipulating what can and cannot be shared of their information stored in the cloud.

“[This act] makes each cloud service operator and manager responsible for data protection instead of the client companies, making it easier for non-IT companies to implement cloud systems without worries of spending extra on information security,” Lee Seok-joon, vice minister of science, ICT and future planning, explained at a press briefing last Tuesday.

“We also changed the original version of the act to take out the National Intelligence Service’s role in overseeing each cloud company’s security status,” said Seo Seok-jin, head of software policy division at the ICT Ministry. Opposition lawmakers and civic groups in the past opposed the act, saying that the NIS’s role could result in illegal surveillance of personal information.

The IT industry is positive about the legislation despite worries that foreign IT giants could move in on the local market.

According to the Korea Association of Cloud Industry, there are 164 companies in Korea as of last week doing business related to cloud computing technologies.

Telecommunication giants like KT and LG U+ and global IT companies account for a large portion of the market because they have data-storage network infrastructures. In the absence of companies that specialize in cloud computing, small companies and start-ups are mostly cloud-based software and solution developers.

However, the association of small and midsize cloud solution developers says it thinks the new law should give them opportunities because they have their own competitiveness edge.

“The act creates an entirely new industry that hasn’t existed before, so it will expand the overall business landscape and range of business models also for small companies,” said Lee Chun-gil, head of the industry research department at the association. “Even if global network developers like Google and Amazon Web Services want to grab the local market, they are almost forced to cooperate with local companies like us due to technical differences in network environments.”

SAP has rented out parts of LG CNS’ Busan data center since last June to expand its cloud services in Korea.

Positive forecasts resulted in a rise of stock prices of major software developers, network companies and even security companies, in both the large and small-cap Kospi and Kosdaq.

Shares of major beneficiaries of this act - large IT companies like KT, Samsung SDS and SK C&C and midsize developers like Hancom and Daou Technology - have mostly risen since March 4.

“As the cloud act takes effect later this year, new orders ranging from several hundred billion won to 1 trillion won are expected to occur from both public and private sectors every year,” Jeon Yong-gi, an analyst at Hyundai Securities, wrote in a report last Friday. “With more cloud computing-related infrastructure prepared, the Big Data industry will grow along with other derivative industries like telemedicine, financial technology and the Internet of Things (IoT).”

Jeon added that “the public sector’s implementation of cloud services significantly influences the technologies spreading out to the private sectors,” referring to the a similar wave of business seen in China recently.