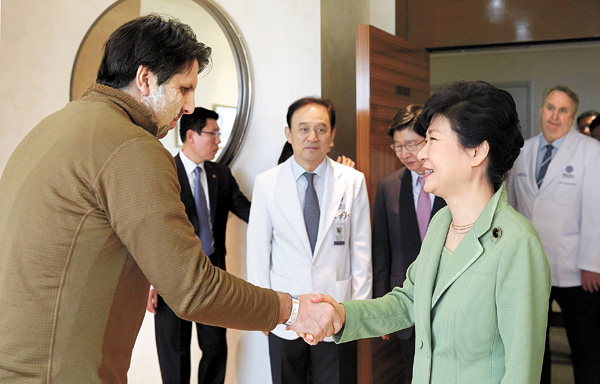 President Park Geun-hye, right, shakes hands with U.S. Ambassador to Korea Mark Lippert Monday at Severance Hospital in Seoul, where he is hospitalized. The injured ambassador is recovering from a March 5 attack by a knife-wielding anti-U.S. activist. Provided by the Blue House

President Park Geun-hye visited U.S. Ambassador Mark Lippert at the hospital Monday to wish him a speedy recovery from the knife attack last week that injured his face and left hand.

Immediately upon her return from a presidential visit to the Middle East, Park headed to the Yonsei University’s Severance Hospital in Sinchon, Seoul, to visit the American envoy. The 10-minute visit was meant to illustrate the president’s commitment to the Korea-U.S. alliance, the Blue House said.

“I was extremely shocked when I heard about the attack,” Park was quoted by the Blue House as telling Lippert. “I suffered a similar attack in 2006 and underwent surgery at this very hospital for two and a half hours, and my heart ached deeply after hearing that you had suffered the same thing.”

Park said that after her attack, in which her face was slashed during a campaign appearance in May 2006, she decided to serve the country and the people for the rest of her life.

“I believe you will also do many things for the country and Korea-U.S. alliance in the future,” Park told Lippert. She also said the American and Korean people were deeply moved by seeing Lippert’s calm response to the attack. “I believe this will make Korea-U.S. relations even deeper,” Park said.

According to the Blue House, Lippert replied that he will do his best to serve his family and Korea-U.S. relations as Park had suggested, and that he appreciated the support he has received from the Korean government and the Korean people.

Lippert also said it was a significant coincidence that he was treated at the same hospital in which Park had surgery on her face after the attack in 2006. Park, then the chairwoman of the Grand National Party, the predecessor of the Saenuri Party, received an 11-centimeter (4.3-inch) wound requiring 60 stitches. The wound to Lippert’s right cheek was also 11 centimeters and required 80 stitches.

According to the Blue House, the U.S. ambassador said he owed Park because his operations went more smoothly due to the doctors’ experience of treating her.

Park’s visit was the latest in a series by top members of the Korean government and legislature. The U.S. ambassador was attacked Thursday morning at a public event by a self-styled activist for unification, Kim Ki-jong, who also attacked the Japanese ambassador in the past. Lippert is recovering from two operations and Prime Minister Lee Wan-koo and the leaders of both ruling and opposition parties visited him last week.

Before Park’s visit, Severance Hospital held a press conference and said Lippert will be ready to leave the hospital by Tuesday. “We removed about half the stitches from the face of Ambassador Lippert,” said Dr. Chung Nam-sik, head of the Yonsei University Health System, which oversees Severance Hospital. “He had some pains in his wrist and some headache around 11 p.m. last night, but we see no problem in recovery. He is expected to be discharged from the hospital in the afternoon tomorrow.”

The hospital said it removed only about half the stitches because of concerns the wound could open up again. “Because many visitors came yesterday, the ambassador appeared a bit tired in the morning,” Chung said. “Unless there is a special case, he seemed to have no plan to receive a guest today.”

President Park’s visit, however, was an exception. “The ambassador wants to return to work as soon as possible, so we are preparing gear to assist his wrist,” Chung said.

The hospital said it will send a medical team to visit Lippert after his discharge. “Our team will visit him on Saturday to follow up with the recovery of his wrist and the facial wound,” a hospital official said.