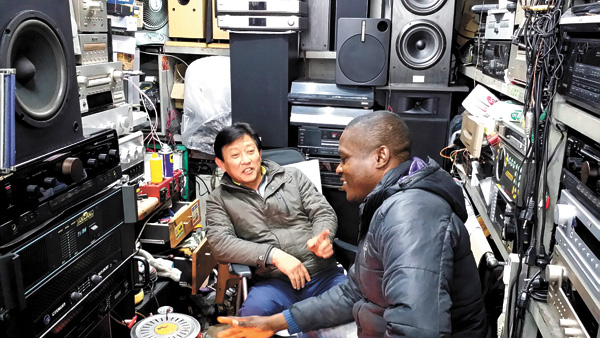 Electronics shop owner Kim Chang-wook and a Nigerian national known as Chima have a conversation about used electronics on Thursday at Hwanghak-dong Flea Market in Hwanghak-dong, eastern Seoul. By Kim Ji-eun

“What about starting another business, like a hardware business?” the shop’s owner, Kim Chang-wook, asked his customer.

“No thanks,” he replied in clear Korean. “I’m already so busy with my audio equipment business.”

“People in my country love dancing, but there are so few audio components in Nigeria,” added Chima, a middleman who, like many others, sends used equipment purchased at the flea market to his native country. “This place is really significant to me.”

Hwanghak-dong Flea Market experienced a heyday during the 1970s and 1980s, and is still known as place where one can find anything: A variety of stores and shops sell an extensive range of used goods such as antiques, electronics and old furniture.

However, its traffic began to dwindle about a decade ago, when the Seoul Metropolitan Government conducted restoration work on the Cheonggye Stream, and from 2003 to 2005, a number of vendors and customers left.

But the market has become increasingly popular among middlemen from Africa, where cheap Korean electronics are preferred for their high quality, and the emporium has seen something of a rebirth.

“Because of [increasing numbers of] foreign middlemen and vinyl enthusiasts, Hwanghak-dong Flee Market has regained some of its vigor,” said Jeong Yun-seo, a curator from the Seoul Museum of History, which recently released a research report on the areas around the Hwanghak neighborhood, in eastern Seoul.

African middlemen first surfaced at the flea market in the 2000s. Some Africans who already had jobs in Korea served as traders, and their numbers have increased. Customers in Nigeria, South Africa and Tanzania tend to prefer electronics made by Korean companies, according to the vendors.

Most African countries rely on imports to meet domestic electronics demands. Yet, the plethora of Chinese imports is often avoided due to their low quality.

Another vendor, Han Un-yong, added that air conditioning units and tools such as drills and chain saws are also popular among middlemen, who transport those products to their homelands about two or three times a year.

Nevertheless, such practices are still illegal under Korean law, as the business is not officially registered.

Ju recalled when a Ghanaian middleman came to his store.

“He took out cash from his belt and refused a bank transaction,” he said.

Still, they have become some of the most significant clients for the market’s vendors and without a report, they are difficult to track down.