Suwon Samsung Bluewings supporters are a sea of blue on Sunday at their team’s K-League Classic opener against the Pohang Steelers at Suwon World Cup Stadium in Suwon, Gyeonggi. [NEWSIS]

The 2015 K-League Classic season is off to a good start as more fans flock to stadiums and teams roll out aggressive marketing campaigns.

The K-League office said combined attendance for the six weekend games was 83,871, the most since Korea’s top football league changed the way it collects attendance data in 2012.

League match coordinators now get sales information directly from ticket vendors and check it against the gate at stadiums.

The match between the Suwon Samsung Bluewings and Pohang Steelers on Sunday was a good example of how teams are eager to make changes to increase the excitement of K-League football. 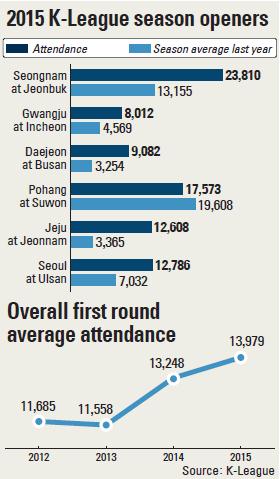 At Suwon World Cup Stadium, blue-clad Suwon supporters filled the East, North and West stands. Even in the South stand, which is considered to be an area for visitors, Suwon fans seemed to occupy almost two-thirds of seats. As a result, Pohang supporters were largely relegated to the Southwest stands.

This year, Suwon decided not to open the second level of the stands and instead will cover it with banners. In addition, the four-time K-League champions decided not to distribute free “invitation tickets” in order to increase number of paid spectators.

According to K-League data, 17,573 fans watched the match against Pohang. Although this was slightly lower than Suwon’s average attendance last year, players and coaches said the club’s decision to close the second level increased the level of intensity in the stadium.

Although the Bluewings allowed the game’s only goal to Pohang midfielder Son Joon-ho in the 72nd minute, fans continued supporting their team until the end.

“With the seats filled all around, the atmosphere of the game was hotter than at any other time,” said Suwon coach Seo Jung-won. “The club’s decision to close the second level is a positive for both players and fans.”

Other K-League matches over weekend also were filled with fans.

The Jeonnam Dragons, whose average attendance last year was only 3,365, saw 12,608 people in the stands at Gwangyang Football Stadium in South Jeolla on Sunday to watch a 1-1 draw with Jeju United.

Incheon United and Busan I’Park also were smiling because of strong attendance Saturday at their home stadiums.

For the game, which Jeonbuk won, 2-0, 23,810 fans were in Jeonju World Cup Stadium, the largest attendance of any opening match.

“Many fans visited the stadium, and the game also was interesting,” said Stielike. “I plan to attend K-League games often.”

According to the league, more than 1.81 million fans attended K-League Classic matches last year, an average of 7,905 per match. The second division K-League Challenge had total attendance of 224,000 last year, averaging 1,227 per game.

Experts say that while high-quality play and marketing is important, football fans also should step up to make the atmosphere at games more friendly and energetic.

After the match between Jeonbuk and Seongnam, the severed head of a magpie was found on stairs to a section for Seongnam supporters. The magpie is the mascot of Seongnam.

While Jeonbuk supporters deny they were responsible for killing the bird, K-League officials, Jeonbuk and Seongnam are investigating the matter.

“The reason why K-League is pushing aggressive marketing and working for more broadcasts of its games is that it wants to expand the fan base,” said KBS football commentator Hahn June-hea. “But on Saturday there was shocking news that the head of a magpie was found. This kind of action that detracts from the revival of the K-League should be heavily punished.”