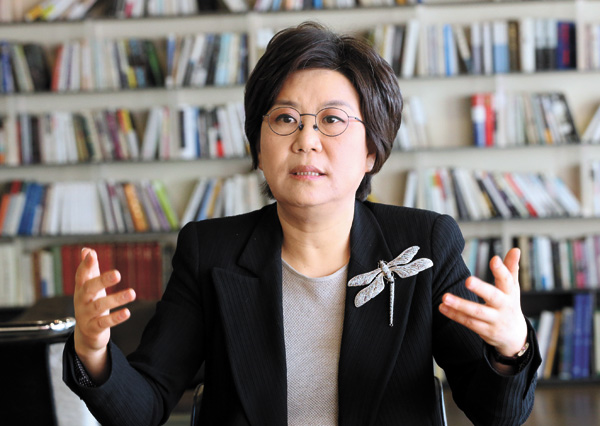 It’s well established that Lee Hye-hoon, a former senior lawmaker in the ruling Saenuri Party, is an old member of the faction supportive of President Park Geun-hye. So it’s no exaggeration to say that she dedicated her decade-long political career working toward helping Park win the presidency.

But no one could have expected how critical she was of Korea’s first female president last month.

Lee countered the president’s harsh criticism of lawmakers who delayed passage of real estate-related bills, arguing that the three bills in question are not as effective as Park may believe and adding that the president’s economic perspective was wrong.

Bae Myung-bok, an editorial writer and columnist for the JoongAng Ilbo, sat down with Lee earlier this month as questions arose over the lawmaker’s unexpected response.

Q. How did the politicians around you respond to your remarks?

A. I faced a lot of “threats.” Some told me they wouldn’t leave me alone. Some said I would never be able to return to the party.

Did you make those arguments with the intention of exiting the pro-Park faction?

It might be difficult to say so in terms of physical distance, but my affection toward her implies that I am.

Have you received contacts from the president since she took office?

No. Not even a phone call. People say I should feel like I was treated unfairly, but I knew she wouldn’t, and that’s why I feel it is less unfair.

When did you learn that?

In 2007, when we held the primary to select presidential candidates for the Grand National Party [the predecessor to the Saenuri]. I saw many politicians who made mistakes due to soured personal relationships. Park was never that kind of politician. It’s a very important virtue in a leader to not lose one’s temper, I think.

But the recent scandal involving the former chief of staff makes the president look like she favors certain personal relationships.

There may be something to that we don’t know; the president feels desperate, I guess. It’s somewhat different from personal reasons.

What are President Park’s strengths and weaknesses?

Her killing smile. I recall several times when she led the party when she eased tensions with just a smile when things were at odds. I hope she uses it more often. Her weakness would be that she limits the number of people she meets and the frequency. Honest conversations with more people can unexpectedly provide solutions to a number of problems. Official reports are important, but having unofficial meals can give her much more important information, especially about personnel. It is hard to get in-depth information about people unless we meet more.

Some say they still don’t know how Park can serve as president despite the past two years. What do you think?

Any government must produce a road map for reform after its early preparation committee is complete. But the Park government didn’t have that. In the first year, there was no mention of reform for the public sector. Then, suddenly it became an issue when the railroad company labor union went on strike later that year. Reforming public corporations should be one of the priorities in a conservative government. But it’s a very difficult task. The government should push for it in the first year when it is the most powerful. But the Park government lacked preparation, although it had a patriotic dedication to the nation.


Is that why the government is referred to as the second Park Chung Hee government? Aren’t the presidential aides too old?

Too much has changed since then. Past government methods wouldn’t work today, or rather, would spark repulsion.

There needs to be aides with digital minds around the president. Park’s close aides are all analog people. What kind of people are around her can change the way of state affairs.

Some critics say the Park government’s lack of communication is a problem, and its inability to manage state affairs is a bigger problem. What do you think?

I think communication is more important. Policy content is supposed to be produced by technocrats. The president needs to listen to balanced people and discern what ideas are right.

Do you think the president’s personnel failures are part of the communication problem?

I think so. If the president meets more people and listens to them, she will be able to appoint someone that the public wants.

How do you see the appointment of Lee Byung-kee as chief of staff?

It was quite shocking that the president brought in the chief of the spy agency as her closest aide. Lee is an open man with ample experience in state affairs. But for such an appointment, the president should have considered the status of the National Intelligence Service.

What about the appointments of three ruling party lawmakers as the president’s secretaries for protocol?

It’s a bad case that could shake the principle of the country’s three-pillar power structure, which comprises the legislature, the administration and the justice department. It is highly likely that the government and political parties might see increased tension as the general election nears. The Blue House shouldn’t be involved in public recommendations of lawmakers in the election. The politicians should keep the Blue House away from that.

Do you think the ruling party can win the next year election?

If the party doesn’t have a makeover, it will see a horrible defeat. The Saenuri Party has tried to change its outside, but it can’t change its inside - its fundamentals. It should stop being a “yes man” to the Blue House. Representatives should create policies in accordance with their convictions.

How do you see recent moves by Moon Jae-in, the leader of the New Politics Alliance for Democracy?

It was a big mistake that Moon suggested taking a joint public poll to determine the appointment of Prime Minister Lee Wan-koo.

I couldn’t believe he was a presidential candidate - and even a lawmaker. But now his mistake is forgotten. He’s doing well.