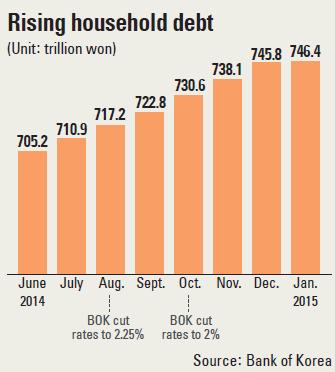 Korea’s household debt rose about 700 billion won ($623.6 million) in January from a month earlier amid historically low interest rates and eased mortgage regulations, a report by the Bank of Korea showed Tuesday.

Concerns mounted over the substantial household debt increase, as the first month of year usually sees a drop in debt thanks to year-end bonuses and a decrease in people changing residences.

In January last year, for instance, household debt shrank by 2 trillion won to 685,180 trillion won from a month earlier, according to the BOK.

“The growth in mortgage loans has been steady since the government’s easing of mortgage regulations in August,” said a BOK official. “Mortgage loans rose at local banks, but dropped at other financial institutions such as savings banks ... The drop in non-mortgage loans was seen due to year-end or new year bonuses.”

Statistics released by the central bank showed Korea’s household debt grew to 746.5 trillion won in January, largely due to a higher level of mortgage debt.

Mortgages accounted for more than half of household debt, up by 1.4 trillion won to 462 trillion won, the report said. Non-mortgage loans fell by 800 billion won.

The BOK said the figures only take into account debt from local financial institutions, such as banks, and not credit cards.

Last year’s fourth quarter saw a record increase in household debt from the previous quarter of 3.2 percent, or 22.9 trillion won, according to the BOK.

Including credit card loans, Koreans recorded 1,089 trillion won of household debt at the end of the year.

Household debt has been boosted by Finance Minister Choi Kyung-hwan’s loosening of regulations in the real estate market and the central bank cutting its benchmark last year in an attempt to boost the sagging housing industry.

Last August, Choi announced a package of stimulus plans, including easing the debt-to-income and loan-to-value ratios for mortgage loans. In the same month, the central bank also lowered the benchmark rate to 2.25 percent and again in October to the historic low of 2 percent.

While debt continues to soar, domestic consumption remains stagnant, the Ministry of Strategy and Finance said in a report. The monthly report on economic issues said the latest ominous figures, such as wilting consumption and production, were mainly due to falling oil prices and fewer business days in February.

Korea’s consumption in February fell 3.1 percent while production was also down by 1.7 percent, according to the latest government statistics. Inflation also recorded a 0.52 percent drop year-on-year in February, its lowest level since 1999, and effectively below zero considering the increase in cigarette prices.

Even considering some temporary factors such as calendar effects, the signs of recovery in the housing market are not stable, the report said.

“Although there were several positive signs of rebounding in the property market and improving consumption and investor sentiment, the signals for rising domestic demand are still unstable,” the report said.

“We see the Korean economy is showing signs of recovery, based on increases in CSI [Consumer Sentiment Index], BSI [Business Survey Index] and the housing market,” said a Finance Ministry official.

“Still, some economic figures show that growth in the mining, manufacturing and energy industry has been fluctuating recently, so it is still hard to say recovery signs are strong.”