Paul turns up at Stella’s show

Paul turns up at Stella’s show 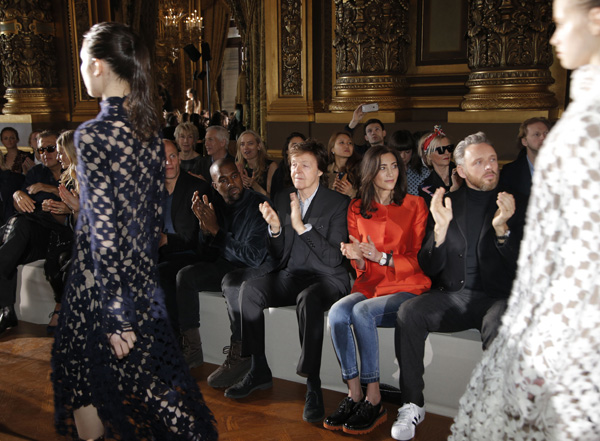 But the strong celebrity presence wasn’t needed to attract attention to the 43-year-old’s designs.

Hitting the on-trend spot, Stella McCartney sensually explored styles of undressing for fall-winter 2015, with a hint of the corset.

Gone were many of the sporty shapes that are now associated with her aesthetic - and in their place were silhouettes, cinched chicly with a belt at the waist or bustier-shaped. Elsewhere there were voluminous “comfort’’ shapes on beautiful loose knit sweater-dresses in earth tones, which would fall nonchalantly off one arm - as if in a state of undress.

Then, in a fabulous series of yeti-style “Fur Free Fur’’ looks - shimmying past stylishly - McCartney evoked the spirit of her late animal rights activist mother, Linda. They were so well crafted, that even the most knowledgeable fashion editor might not have been able to spot the difference between this fake fur and the real deal - had they not known who had designed them.

They were twinned with great `70s kick flare pants that, together with flashes of eclectic metallic panels, gave the collection a real disco lift. AP