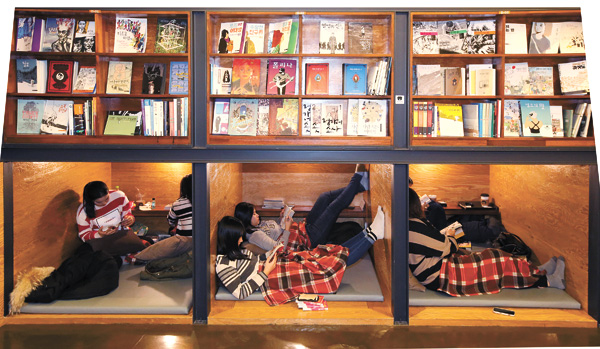 Customers read comic books while tucked away in cave-like spots at Make Your Story Happen, a cafe in Mapo District, northwestern Seoul. People can stay here all day eating snacks and drinking beverages. By Kim Kyung-bin

Sitting around in a cafe, reading one of your favorite books with a good cup of coffee sounds like the perfect way to spend a lazy day.

But in Seoul it’s not so easy to realize this modest dream because cafes are usually too busy and noisy.

Most importantly, a lingering customer is just not welcomed by cafe owners, especially at non-franchise establishments where the table turnover rate is critical to generating profits.

That’s why some of these coffee shops turn on loud music and furnish their space with uncomfortable chairs to get the old customers out and the next ones in.

While this may seem reasonable, there are some local cafes that go against the grain and allow visitors to stay as long as they want, providing various cultural activities and a cozy environment. 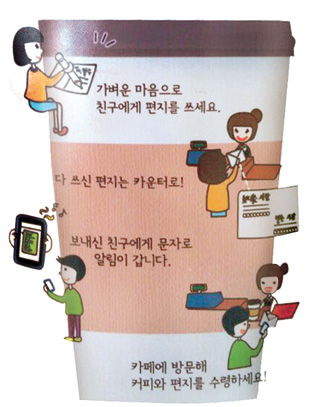 Instructions for using the hand-written letter service provided at It’s Okay to Stay Long: 1.Write the letter. 2. Hand it in at the counter. 3. A staff member will send a text message to the recipient. 4. The recipient will receive the letter and a coffee if he or she visits the cafe within 60 days.

For example, on arrival at Make Your Story Happen, located in Seogyo-dong, Mapo District, northwestern Seoul, customers are expected to take off their shoes. Once in their slippers, they buy a pass that allows them to cuddle up anywhere they want for as long as they want.

The most sought-after spot is under a bookshelf that looks like a miniature cave. The cushioned space, which comes with a blanket, is large enough to accommodate two or three people, and dozens of comic books are available right above their heads.

You’re free to sit, lean, or even lie down and roll about here.

The cost to use this unique cafe is 3,000 won ($2.67) for an hour-long pass and 15,000 won for an all-day pass. The extra cost incurred for beverages and snacks is relatively cheap.

But she wanted to set up a neater, more modern venue than the rental stores she remembered.

“The joy of paper-based media is fast diminishing,” the 44-year-old said.

“However, I still thought it was necessary to create a space that satisfies those who have hobbies like me.”

There are more than enough people who agree with Kim.

“I used to read or rent comic books at comic book rental shops before, but I was sorry that most of them disappeared,” said Lee Seok-hyun, a college student who visited Make Your Story Happen with his girlfriend.

“I’m glad to see such a nostalgic place resurrected in an evolved form,” the 20-year-old added.

As you would expect from the name, It’s Okay to Stay Long, also located in Mapo District, allows visitors to hang out at the cafe for an unlimited time. 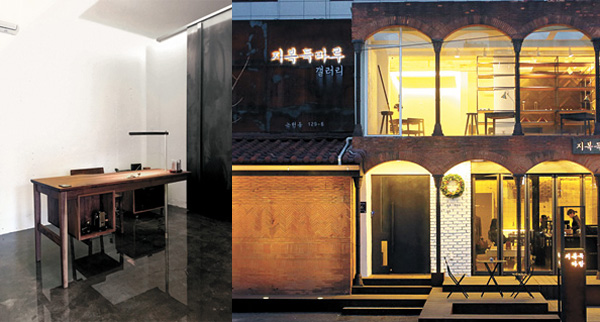 Gallery / Right: At Ji Bok Deuk Woodflooring in Nonhyun-dong, southern Seoul, visitors can enjoy coffee on the first floor with a view of a mini gallery on the second floor. Left: A table that is currently on display on the cafe’s second floor.

Its owner, Kim Bang-wool, said she wanted to create a coffee shop where people feel comfortable sticking around awhile.

“When I was a student I felt bad about ordering just one cup of coffee and staying there for hours and hours reading or studying,” said the 32-year-old while explaining why she opened her cafe five years ago.

To add an extra element to the customer’s experience, Kim implemented a letter service. Customers can buy paper along with a cup of coffee and leave a hand-written note at the counter with a phone number. The recipient then receives a call from the staff and can come pick up the letter and a free cup of coffee when they visit the cafe.

At these spaces, reading and writing is not merely all there is on offer. There’s also music.

Kim Hyun-jin, the owner of Mapo District-based music cafe Bitter Sweet Sound, is a vocalist - and writer and composer - in a band of the same name. 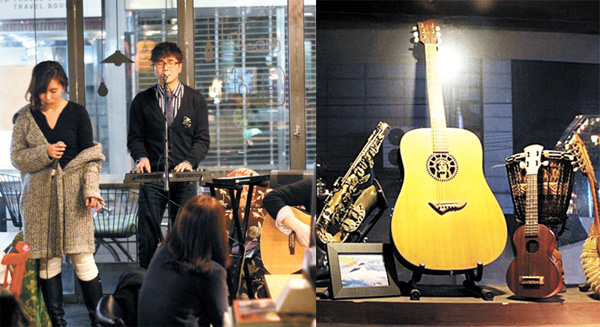 Music / Left: Musicians perform at Bitter Sweet Sound, a live music cafe in Mapo District, northwestern Seoul. The schedule for performances is announced beforehand so that customers can time their visits. Right: Vintage instruments on display at the cafe.

After realizing that street performers find it difficult to retain a steady audience, Kim decided to open up a cafe where bands can play on a stage set up in one corner of the shop.

“There is definitely a demand for an exotic cultural experience,” explained Kim.

“And also there are artists who want to play their music whilst interacting with an audience. My initial intention was to connect these two groups.”

“Usually, we have to order an alcoholic beverage at live bars. But at this place, we can enjoy the music with coffees. We don’t even have to pay an entrance fee.”

In spring and fall, when the temperature gets warm enough for an open-air performance, the cafe transforms its terrace into an outdoor stage.

Down in Nonhyun-dong, southern Seoul, you can find two-story cafe Ji Bok Deuk Woodflooring, which is also a mini gallery.

This trendy spot is managed by a home decor company of the same name.

On its second-floor gallery, the pieces, which mostly come from new artists, rotate every five to six months. Entrance is free.

“Since this neighborhood is home to many upscale and fancy interior and furniture stores, some people don’t even bother to come here,” Son Hyun-jeong, the manager of the cafe, explained.

“I wanted to lower the entry barrier that people have towards housing culture by opening up this place where people can drink tea while at the same time enjoy the art,” she said.

Critics point out that people’s thinning wallets are one of the reasons why these cafes-cum-cultural venues are getting more and more support.

“Watching movies, dining out and going to a cafe are such obvious date routines, which also come at a large financial cost,” said Yang So-hee, a 25-year-old student who visited the comic book cafe with her boyfriend.

“While experiencing a unique culture, we can also save on expenses,” she explained.

Fatigue of the digital world is also a factor for the growing popularity of these cultural salons.

While comic books, novels, music and even art are becoming available in digital form, some people are adversely attracted to old-school formats.

“Listening to music through digital devices makes people feel all the more lonely,” said Jung Young-gu, who was enjoying a live performance one night at Bitter Sweet Sound.

“It feels like you’re more closely interacting with the audience when watching performances in confined venues,” he said.

Park Chung-ja, an emeritus professor at Sangmyung University, said that these kinds of cafes provide people with a sense of belonging.

“With competition in society getting fiercer, people feel they are alienated from the mainstream,” Park said.

“When they feel alone, they want to be with someone else while at the same time not feel restricted. These spaces offer this.”