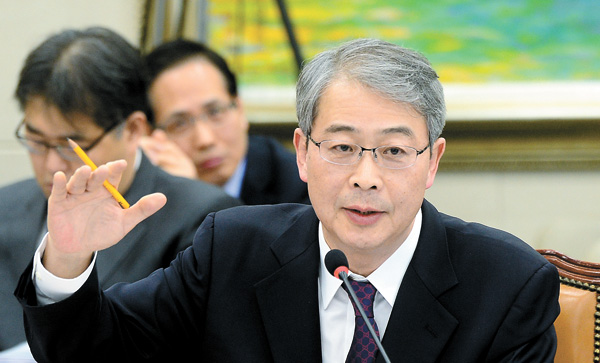 Yim Jong-yong speaks at his confirmation hearing as chairman of the Financial Services Commission, held at the National Assembly in Yeouido, Seoul, on Tuesday. [NEWSIS]

Yim Jong-yong, nominee to become chairman of the Financial Services Commission (FSC), said the household debt problem is the biggest issue for the national economy and pledged stricter management of the debt as part of his reform plans for the financial industry in a confirmation hearing held Tuesday.

Yim, former chairman of Nonghyup Financial Group, was nominated by President Park Geun-hye in February to lead the country’s top financial watchdog. He is considered one of the most qualified candidates for the job thanks to his experience in both the public and private sector.

“The growth pace of household debt is quite rapid but I don’t think it is a pace that poses risks to the financial system,” he said at a parliamentary hearing at the National Assembly in Yeouido. “I will thoroughly check and monitor it.”

Korea’s total household loans including purchases on credit last year was 1,089 trillion won ($968 billion), raising concerns that they could pose a threat to economic recovery.

Yim said the FSC will cooperate with the Ministry of Strategy and Finance and the Bank of Korea to manage the household debt situation and improve local lenders’ debt repayment assessment practices.

Although Yim acknowledged the seriousness of ballooning household debt, he said it is not at a level that could put the entire financial system at risk. He said the government’s decision to ease limits on borrowing money to buy real estate was the right thing to do.

After being appointed, Yim mentioned several times that the Korean financial industry needs great reforms in order to recover growth.

Yim said he will keep deregulation at the forefront of his policies in order to boost autonomy of financial institutions and keep them from being bothered by the government or other authorities.

“I will have the FSC change its role from coaching financial institutions, and meddling in every minor issue, to a judge who manages the playing field on which the institutions are doing their business,” Yim said.

He said the FSC and the Financial Supervisory Service (FSS), a private oversight agency that works with the FSC, will carry out separate reforms to help institutions change.

“Korea’s financial industry has failed to find a new growth engine while losing dynamics and innovation,” Yim said. It is currently facing many challenges such as low interest rates, an aging society and increasing need for convergence between the IT and finance.

“It is the right time as well as the last opportunity for the financial industry to make reforms,” Yim added.

Deregulation is the biggest emphasis for the Park Geun-hye government this year.

After Yim showed support for the current government’s financial policies, lawmakers criticized him for being too compliant with the Finance Ministry and questioned his independence.

The FSC was separated from the Finance Ministry during the Lee Myung-bak administration in order to strengthen it after the outbreak of the 2008 global financial crisis. It was going to be merged with the FSS, but that failed due to conflicts over their areas of operations.

Some lawmakers pointed out the FSC should come up with more independent financial policies that are not determined by the Finance Ministry.

Yim’s plans for financial policies seem within the scope of the finance minister’s policies, said Shin Hak-yong, a lawmaker of the opposition New Politics Alliance for Democracy. The nation’s top financial regulator shouldn’t appear to be dependent on the Finance Ministry, he said.

As for the controversial merger between Korea Exchange Bank and Hana Bank, the nominee said he will approve the deal only after Hana Financial Group wins consent from its labor union.

“It is desirable that Hana Financial Group push forward with the merger after management and labor agree,” said Yim.

“The two parties have to think for a while and come up with rational plans.”