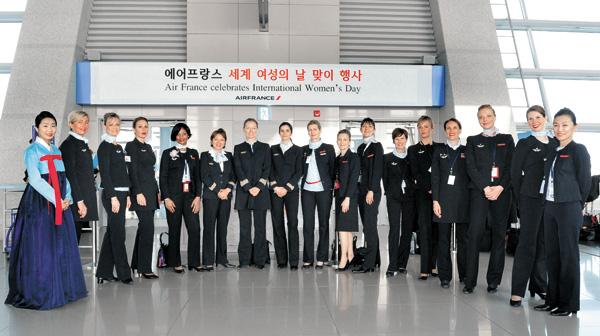 All 18 flight crew members, including the pilot and co-pilot, aboard Air France’s Boeing 777-300 AF267 traveling from Incheon to Paris-Charles de Gaulle were women, in celebration of International Women’s Day. Provided by the company

The passengers may not have been all women, but the entire crew on an Air France flight from Seoul to Paris on Monday were.

According to Air France, all 18 of the crewmembers aboard the Boeing 777-300 flight AF2674 from Incheon International Airport to Paris-Charles de Gaulle were women in celebration of International Women’s Day.

The team consisted of a pilot and a co-pilot, as well as chief purser, two pursers, 12 stewardesses and one Korean interpreter.

That wasn’t the only event the French airline held in celebration of the annual International Women’s Day, which fell on Sunday.

At the Air France checkin counter at Incheon airport on Monday, the airline offered a cosmetic set in a pink floral box to all female passengers.

The airline said it has been trying to celebrate the day a different way every year.

The airline offers four roundtrip flights a week from Seoul to Europe through airports in Paris and Amsterdam.

A partner of Korean Air, it has a total of 24 flights throughout the week.