Spring hiring season has arrived but the forecasts are gloomy about the economy - and the number of young people who will be brought into the work force this year.

Competition will be heated for jobs, particularly for young people who studied humanities in college.

According to a recent survey done by the Federation of Korean Industries (FKI) and local polling company Research & Research on the nation’s 300 largest companies by sales, companies said they will have 40.8 percent jobs open for humanities majors, while 59.8 percent of positions will be filled with science and engineering majors. 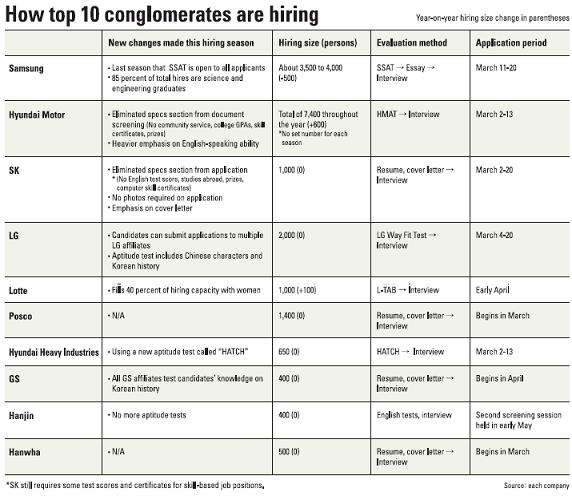 Samsung Group, one of the nation’s largest employers, said about 80 to 85 percent of its total hires this season will be engineers. Total hiring will be downsized to about 3,500 to 4,000 persons, a reduction of 500 compared to last spring.

The 10 top conglomerates announced they will start shifting the focus of candidate evaluation to actual job capabilities as seen in internship experiences, in-depth knowledge of certain fields and specific skills demanded by the job position. They will stop judging candidates on so-called “specs” such as English language proficiency test scores, community service and various skill-related certificates. For many years, good specs were the way to get hired out of college.

That trend puts humanities and social sciences majors at a disadvantage because those subjects are less skill-based and not directly related to jobs in companies.

“Large conglomerates used to consider the ‘specs’ to be most basic and necessary assessment tools,” said Seo Mi-young, vice president and co-founder of local recruitment website Incruit. “But they are now realizing that hands-on capabilities are more crucial than academic specs.

“Now is the time when graduates of colleges in rural areas - who have been marginalized in the local hiring market in the past - can be more attractive candidates than humanities majors from Seoul-based colleges as long as they have strong engineering capabilities.”

College students should narrow the range of specs they build up for their resumes to activities closely related to the career paths they are choosing, added Seo.

Starting this spring season, Hyundai Motor Group does not require candidates to put extracurricular activities and community services on their applications, while leaving a limited amount of space for the specs, such as college grade point averages.

“We changed our application format so candidates won’t waste time and money building meaningless specs,” said a recruiter at Hyundai Motor. “I hope this helps the job seekers focus on building experiences that will actually help their careers.”

Other conglomerates like Samsung and LG Group are also adjusting their application format to eliminate listings of community service and studies abroad, which are mostly irrelevant to job skills.

“As SK doesn’t ask for any academic specs or a mugshot, the cover letter is the most crucial way in which the applicants can express themselves,” said Cho Don-hyun, executive director of SK talent fostering commission. “We will assess hands-on job capabilities at interviews, where we’ll ask questions about internship experiences.”

While ignoring general specs, which made recruiters judge candidates by numerical scores in many cases, the companies are putting heavier emphasis on qualitative factors like English speaking ability.

After passing the company aptitude test, which is called HMAT, the candidates have to go through a one-on-one English interview with executives and give a presentation in English. Then they participate in a 20- to 30-minute English debate in groups of five or six.

Korean history is also important for interviews. Big companies are asking more history questions on their aptitude tests because they want candidates with clear historical views.

LG Group’s aptitude test includes a total of 20 questions involving Korean history and that require knowledge of written Chinese language. GS Group decided to include history-related questions on aptitude tests at all its affiliates starting this spring. The Samsung aptitude test will include about 15 history questions this year.

“I would say candidates should spend time subscribing to online lectures on [the state-run education TV channel] EBS as a realistic way of preparing for the aptitude tests,” said Hong Ki-chan, a job consultant. “Candidates should be very familiar with major historical events in Korea so that they can immediately name each of them in chronological order.”

“In the essay section, we expect to see each candidate’s view of major historical events,” said Jang Hye-rim, head recruiter at Hyundai Motor.

The spring hiring season will be even more challenging for women applicants due to employers’ preference for guys.

According to the FKI survey, major conglomerates said they want to fill 66.6 percent of open positions this spring with men, while only filling 33.4 percent with women.

This means women will face double the competition than their male counterparts. The applicant pool usually has a 50 to 50 gender ratio.

Job experts say women should aim for women-friendly companies in fashion, marketing, retail and service industries. They include some Samsung group affiliates, Lotte and Korean Air.

Lotte Group said it will allot 40 percent of its entry-level jobs for women, while Samsung Group as a whole will allot 30 percent.

Korean Air said it plans to hire 900 new flight attendants this year, up 50 percent year-on-year, while eliminating the carrier’s long-standing height limit. Previously female candidates had to be taller than 162 centimeters (5 foot 4) to apply.

As for the Samsung Aptitude Test, which will be held for the last time this spring, Samsung recruiters advise that candidates should review theoretical knowledge related to job positions they are applying to.

“Samsung products like smartphones and semiconductors consist of various technologies like electrical and mechanical technologies,” said Kim Ki-joo, former recruitment director at Samsung Electro-Mechanics. “So engineering graduates should spend their time digging deeper and wider into the areas of their college majors instead of studying basic humanities.”