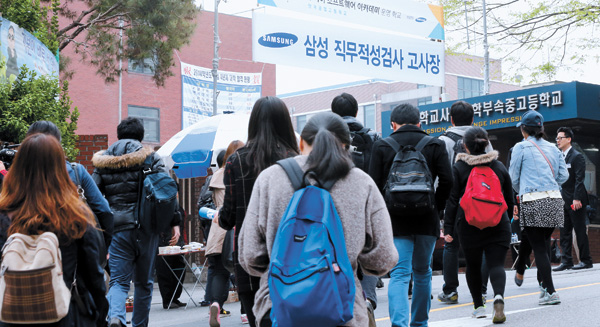 Samsung Group is planning to hold its next Samsung Aptitude Test (SSAT), a requirement for all applicants hoping to land a job at the nation’s largest conglomerate, on April 12. But this year, the number taking the exam is expected to grow exponentially.

After April, the eligibility requirements for the SSAT are expected to become much more competitive as Samsung overhauls its hiring process to streamline recruiting expenses.

Annually, approximately 200,000 people take the test - considered equivalent to the civil servant exam or the bar - and until now, any college graduate who met the basic requirements was eligible to take the test. The SSAT is the third biggest exam in Korea after the College Scholastic Ability Test (CSAT), which about 600,000 high school students take each year, and civil servant exam, which attracts roughly 200,000 to 300,000 annually.

Like these, it has been criticized for having certain side effects - that it has exacerbated the popularity of private education and cram schools, for instance. 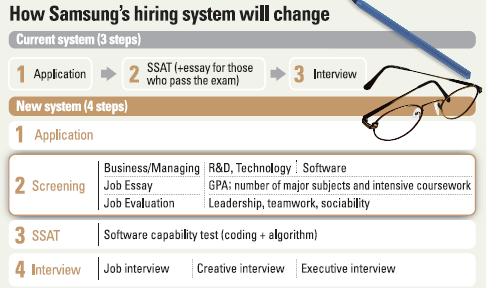 Samsung is slated to apply its new system in the second half of the year. As part of that, recruiters will examine specific information related to an applicant’s major course of study, such as an essay over the material or specific class work. Only those who pass will be given the opportunity to take the SSAT.

The SSAT on April 12 is the last exam that will not require applicants to meet those conditions.

“We are expecting fierce competition,” said Seo Mi-young, an executive of Incruit, a local job portal.

Generally, the SSAT tests applicants on five fields such as language, math, reasoning, general knowledge and visual thinking over 160 questions.

Those applying for jobs related to advertising, software or design are also tested on questions concerning those positions, while the exam demands multi-dimensional perspectives on reading material and professional experience.

Other questions ask for creative answers or call for an applicant to elaborate on Samsung’s social contributions.

One question, for example, asks the test-taker to expand upon a proverb about chicken and beer, while tech queries ask for information on the Internet of Things (IoT) or Long-Term Evolution Advanced (LTE-A) network.

Advertising applicants are asked to provide two drawings to illustrate the difference between a daughter and a daughter-in-law.

The examiners are new Samsung employees who took part in a month-long camp to draw up questions. “They make trendy new questions in new styles every time, so it’s no use to buy SSAT workbooks or pay for private tutoring,” said one Samsung official. “Scoring high doesn’t matter either because it’s pass or fail.”

Under the new system, which starts from the next recruitment session later this year, applicants must go through different procedures according to the positions to which they apply. Business and managing job applicants will be required to submit job essays over relevant experiences. Resources and development, technology and software applicants will be evaluated on college coursework and grades.

Samsung, which plans to hire around 4,000 to 5,000 people this year, will accept applications from March 11 to 20. Those who pass the SSAT will undergo several job interviews before a final announcement is made in June.

Those eligible are university graduates or those who will graduate in the summer, and their grade point average must be over 3.0 on a 4.5 scale.

Each company in the group has individual standards for English-language requirements.

LG also applied some changes to its recruitment system by unifying all recruitment for its affiliates and cutting down specification requirements.