Merkel urges Japan to confront its wartime past

Merkel urges Japan to confront its wartime past 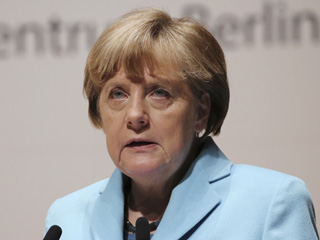 German Chancellor Angela Merkel reminded Japan to squarely confront its wartime history in order to reconcile with its neighbors, referring to her own country’s post-war experience during a two-day visit to Tokyo.

“Reflecting on the past is one of the preconditions for reconciliation,” she said Monday in a joint press conference with Prime Minister Shinzo Abe in Tokyo.

The chancellor added that Germany’s examination of its Nazi past enabled “work on reconciliation, which allowed for the creation of the European Union.”

Merkel’s pointed remarks stressing the importance of Japan’s reflection on its wartime actions, which come only months ahead of the 70th anniversary of the end of World War II, drew mixed reactions from major Japanese media outlets Tuesday.

The Japanese government’s increasing tendency towards historical revisionism over its actions during World War II has contributed to diplomatic tensions with Korea and China, its closest neighbors.

Merkel acknowledged earlier on Monday at a lecture hosted by the Asahi Shimbun and the Japanese-German Center Berlin that the acceptance of Germany by the international community after the horrors of World War II and the Holocaust would not have been possible without the “generous gestures of our neighbors.”

But “there was an acceptance in Germany to call things by their name … [and] a readiness in Germany to face our history openly and squarely,” she said.

The chancellor also pointed to reconciliation between Germany and France as a major achievement.

“The French have given just as valuable a contribution as the Germans,” said Merkel.

On Tuesday, the liberal-leaning Asahi Shimbun used the headline “Reflecting on the past a precondition to reconciliation” in covering the chancellor’s visit, which was anticipated in Tokyo to highlight Japanese and German cooperation.

However, many conservative outlets downplayed Merkel’s remarks on history issues. In its front-page story as well as in other articles that dealt with Merkel’s visit, the Yomiuri Shimbun instead focused on the crisis in Ukraine and bilateral cooperation.

It avoided using any headlines that mentioned history or the past, and dealt with those issues only briefly. The Sankei Shimbun, likewise, included one sentence about historical issues with Seoul and Beijing.

By contrast, the liberal Mainichi Shimbun reported that the “discussion on the 70th anniversary of the end of World War II was too short” and that Merkel didn’t delve deeply enough into tensions between Japan, China and Korea.

The Korean Ministry of Foreign Affairs also urged Tokyo to follow the German example that helped forge an integrated Europe.

“The lesson learned in history is that Germany, by looking at history squarely and consistently and having shown self-reflection and repentance, provided the foundation for European reconciliation, cooperation and integration,” Foreign Ministry spokesman Noh Kwang-il said on Tuesday.

“Our government looks forward to the Japanese government building up trust with its neighbors by making efforts to look at history squarely and heal the wounds of the past,” he continued.

Because of Abe’s tendency to water down historical issues, the international community is carefully watching whether the prime minister will entirely uphold the landmark 1995 apology by Prime Minister Tomiichi Murayama for Japan’s wartime atrocities during his upcoming address to mark the 70th anniversary of the end of World War II.

That also includes wording on its “colonial rule and aggression.”

Korea, in particular, has demanded that Tokyo show more sincerity in dealing with the issue of the Japanese Imperial Army’s forceful recruitment of young women into sexual slavery during colonial rule.

Merkel admitted that, as the German chancellor, she could not give advice to Japan on how to deal with the problems with its geographical neighbors, but that the solution “has to come out of a process in society.”

The trip, which concluded on Tuesday, was Merkel’s first visit to Japan in seven years.

She last visited the country in 2008 for the Group of 8 Summit.